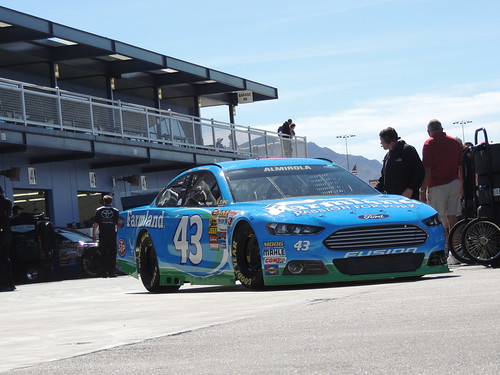 It was a typical 4th of July weekend in Central Florida.  Heat , humidity, and thunderstorms were the order of the day once again at the Daytona International Speedway!

The Saturday night race, the Coke Zero 400, was postponed til Sunday morning because of the heavy thunderstorms and lightening all around the racing facility.  But the lingering thunderstorms and rain caused the Sunday show to be called after 112 of the scheduled 160 laps.

Obviously nobody had the foresight to select an extremely dark-horse for this race, therefore ,none of the players had picked this winner at Daytona.  However, once again this week “Jeremy the Coach” scored just enough points to maintain his lead through the halfway point of this segment.

Edie is making a nice recovery from an earlier slide securing 33 points from her pick of Jeff Gordon.

The nine players that chose Dale Earnhardt, Jr. this week, “Jason The Latent Tie Dye Hippie”, “Bernie The Bay Area Bandit”, Zee, Doug, Jr., “Jim, aka Chiefy”, “A&M Aggie Sue”, Dawn, and yours truly, “Leon Your Most Humble Sheriff” emerged semi-unscathed!  Despite Junior’s early involvement in the lap 21 crash, he was able to overcome some sheetmetal damage ,and rally to a 14th place finish, giving the above players 30 points.

Rounding out our top five scores is “Carlton The Doorman” who logged 26 points from “Blazingly Bad”Brad Keselowski’s 18th place finish.

Once again this week finds two-thirds of the Gandy clan leading the way in all the movement in the standings. The player with the greatest movement this week is “Doug The Former Mudslinger and Psychic Turned Kettle Corn Dude”. Doug’s 38 points propelled him up eight (8) places, landing in sixth place.

“Your Most Humble Sheriff” rocketed up five spots, landing comfortably in the middle of the standings, 10th place.

A pair of players, Dawn and Edie, moved up the scoring pylon four spots this week, landing in 9th and 12th respectively.

Conversely, the other 1/3 of the Gandy clan, Brandon, fell out of “a podium position”, and plummeted seven places, far from the money, settling in 11th place.

Both Marc and “David The Mudslinging Throttle Jockey” slid down four spots in the standings residing in 13th and 14th, respectively.

Lastly, Zee and Doug, Jr. each stepped up two spots on the totem pole this week, holding down 15th and 16th places, respectively.

This week we have five players who showed their total incompetence in picking a winner!  That is correct, five players secured a single digit results for their efforts at Daytona!  But the one who showed that he knows very little about numbers, odds, and the theory of probability is none other than “Dan The Numbers Cruncher”!  It is quite unfortunate that “The Numbers Dude” waited to choose Johnson at Daytona in this segment.  “Six-Pack” went out in the very first wreck on lap 21, thereby giving “The Accountant Dude” just 2 points! Therefore, “Dan The Numbers Cruncher” wins, hands down, “the crappiest picks of the week” award.

Lastly, it is with great pleasure that I would like to announce that we have a new “cellar dweller” this week! “Jason The Latent Tie Dye Hippie” finally extricated himself from the throne this week.  His replacement as “The Prince/Princess of The Poophouse” is “Karen The Highly Opinionated Southern Belle”.  This week “The Highly Opinionated Southern Belle” only gathered up a score of 16 points, and now is in firm control of “The Outhouse”.  Fortunately she did not have a long way to fall, but nevertheless, fall she did!

Just as a side note, “Dan The Numbers Cruncher” is lurking just outside the front door of “The Outhouse”, tailing by a mere five (5) points!

Next week NASCAR moves into the Northeast to a race track that is not too many miles NW of Boston–Louden, NH.