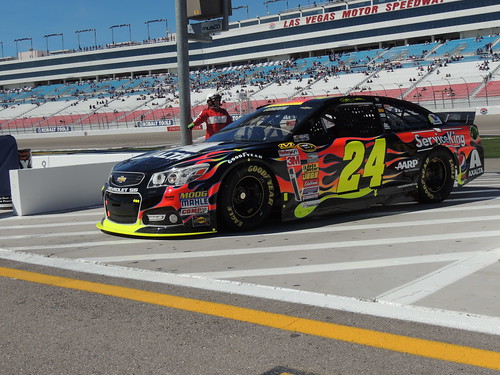 That statement was proven true today at the Indianapolis Motor Speedway!  Gordon won the Brickyard 400 three times in the first ten years!  However, it took 10 years for Jeff Gordon to win again at this fabled venue. This victory was Gordon’s fifth win at his home track, IMS!  The only other race car driver to win five races at Indy is F1 driver, Michael Schumaker.

Even though “Bernie The Bay Area Bandit” did not score the most this weekend, 40 points, it was still enough for her to maintain her position as the leader.  Her lead is a very slim 7 points!

There were four players who grabbed 47 points at Indy.  Those four players are “Karen The Highly Opinionated Southern Belle”, “Carlton The Doorman”, “A&M Aggie Sue”, and “Jeremy The Coach”.

Brandon was rooting for Denny Hamlin, and received 42 points from “The Delivernator”.

Once again there was wide spread movement in the standings.  Sixteen of the twenty players traded positions from the previous week.

There were four players who moved the most, five places.  Both “Jeremy The Coach” and “Karen The Highly Opinionated Southern Belle” each climbed up five spots on the totem pole, residing now in third and thirteen, respectively.  Conversely, Carole and “Dan The Numbers Cruncher” each fell five positions Sunday, landing in seventh and eighteenth, respectively.

After Indy there were three players who moved three spots.  “Carlton The Doorman” moved up in the standings to rest in 12th place.  Both “David The Mudslinging Throttle Jockey” and “Jason The Latent Tie Dye Hippie” slid down in the standings resting in 17th and 19th, respectively.

There were another four players who moved up two places this week.  Lonna,  Marc, Doug Jr., and “Leon The Retired Airline Captain, Part-Time Cardiologist, Midnight Strawberry Picker, Former Elephant Driver, and Your Most Humble Sheriff”, each crept up on the totem pole two spots.

There were two players who dropped two spots this week, “Jerry The Buschwacker” and “Doug The Former Mudslinger and Psychic, Turned Kettle Corn Dude”.

The “crappiest pick of the week” goes to just one person, Carole.  Even though she did not grab a single digit score, her 16 points was the lowest for the week!

There was no change this week in the “CONTROL OF THE CRAPPER”!  Notwithstanding the fact that Edie did score a reasonable number, 29 points, it was still not enough, on her part , to relinquish her position as “Princess of The Poophouse”!

Nest week NASCAR returns to “the tricky triangle” Pocono for the second race there in 2015.  For those who are short on their PA geography, the Pocono Raceway is about halfway between Allentown and Wilkes-Barre.