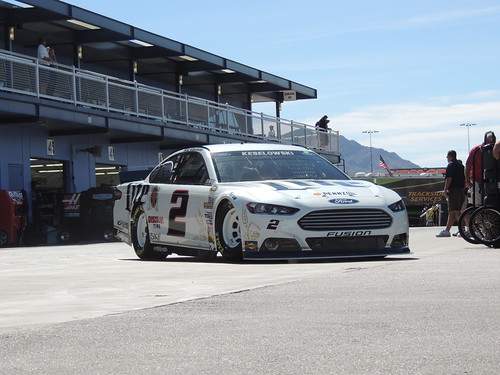 This week NASCAR makes it’s second trip to “the tricky triangle”, better known as Pocono Raceway.  As the races wind down prior to The Chase, it now “go time” for those who are trying to grab a place in the sixteen driver “showdown”, as well as those of us who want to grab some of that Redneck Fantasy League money!

This week “Blazingly Bad” Brad Keswlowski is the consensus choice for the second Pocono race of the year. Those who are onboard the Team Penske Alliance Truck Parts #2 Ford this week are Dawn, “Bernie The Bay Area Bandit”, “Jason The Latent Tie Dye Hippie”, and yours truly, “Leon Your Most Humble Sheriff”.

There are five drivers who have two players each rooting for them this weekend.  The first driver on this list is Kevin Harvick, who has Zee and “Karen The Highly Opinionated Southern Belle” in his corner Sunday.

Likewise, Carole and “Jeremy The Coach” will be satisfying their “sweet tooth” with bags of M&M’s in support of Kyle Busch.

Both Edie and “A&M Aggie Sue” are hoping that “The Delivernator”, Denny Hamlin will deliver each of them a cool 48 points at Pocono.

Brandon and “Doug the Former Mudslinger and Psychic, Turned Kettle Corn Dude”  are hoping that Tony stewart will miraculously emerge from his “year-long  hibernation”!  It used to be “where ther eis smoke, there was fire”.  However, this year “the smoke has not yet risen”!

For the six players not mentioned so far, that could only mean one thing!  You got it!  They are “in bidnez” for themselves this week!

Throw him under the bus!

I have just got to mention the one bizarre pick of those that are “in bidnez” for themselves this weekend.  It appears that Marc is definitely under the influence of some rather “strong stuff”!  Ol Marc has selected Danica Patrick to win the race!!!!

Really?????  I guess that it could happen if everyone crashed early in the race!!!! (Sorry, just my opinion!! LOL!)

Danica is having a very difficult time trying to maintain her 28th place in the standings, let alone grab a victory at Pocono this week!

Danica? That one just rolled me away!!