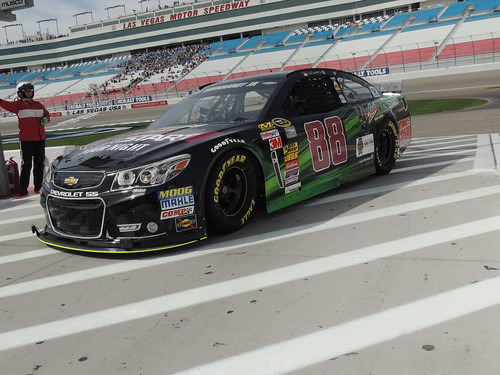 All is well in in the world, NASCAR,  and JUNIOR NATION!

Sunday Dale Earnhardt, Jr. broke out his big ol broom and swept both of the Pocono Raceway races this year!

Dale Jr. only led the final 14 laps.  However, that was all he needed to do in order to hold off Kevin Harvick after a late restart to win the GoBowling.com 400, and take home all the hardware!

We have a new leader after Pocono!  “A&M Aggie Sue” knocked off “Bernie The Bay Area Bandit” off of the top of the totem pole this week!

None of the twenty players has the foresight to pick Dale Jr. to sweep at Pocono Sunday.  However, we did have two players who were riding shotgun with Kevin Harvick at Pocono.  Both Zee and “Karen The Highly Opinionated Southern Belle” grabbed a nifty 43 points, thereby, being the highest scoring players at Pocono!

Our resident accountant, “Dan the Numbers Cruncher”, was the second highest scorer, logging 42 points as the results of Joey Logano’s third place finish.

As previously mentioned, “A&M Aggie Sue” is the new leader, scoring 35 points, as did Edie , all from the efforts of Denny Hamlin’s 9th place finish.

Also having a fine day at the pay window was “Jerry The Buschwacker”!  As his nickname indicates, “The Buschwacker” scored well, 32 points, courtesy of his favorite drivers, this week it was the elder Busch Bro., Kurt.

Rounding out the top five scorers this week are “David The Mudslinging Throttle Jockey” and Doug, Jr., who both had picked Marcos Ambrose as their choice, and garnered 30 points.  Ambrose was a very good choice for Pocono, since it is referred to as a “roval”, a contraction for a road course and oval!

The single largest mover this week is Zee.  With Zee’s 43 points this week, that score was enough to rocket her up eight (8) spots, where she now resides in third place!

Both “Karen The Highly Opinionated Southern Belle” and “Dan The Numbers Dude” each climbed up seven (7) spots this week landing in a tie for 6th spot and 11th place, respectively.

Additionally, both Dawn and “Jerry The Buschwacker” each moved up three (3) places this week landing in 5th and 10th respectively.

On the negative side of the movement scale, “Jeremy The Coach’s” microscopic 2 points for Pocono caused him to plummet six (6) places, now residing in ninth place.

Carole also did not have such a great race.  She dropped a total of five (5) spots this week.

Lastly there were three players who dropped four (4) positions, Brandon, Marc, and “Carlton The Doorman”.

There was no change this week in who is in firm control of “the crapper”!  Edie still has a firm grip on “The Outhouse” throne!  However, “Jason The Latent Tie Dye Hippie” is only four points away from wresting control, and the title of, “Prince of The Poophouse” from Edie!

This week we have a tie for “the crappiest picks of the week” award.  Both Carole and “Jeremy The Coach” each only were able to add 2 points from Kyle Busch’s “crappy” finish to their totals Sunday.

Next week NASCAR makes it’s annual trip to the finger lakes region of upstate New York for the second road race of the season, Watkins Glen International, to be specific.

Good Luck!  In the meantime, I will just be “In a New York State of Mind”!