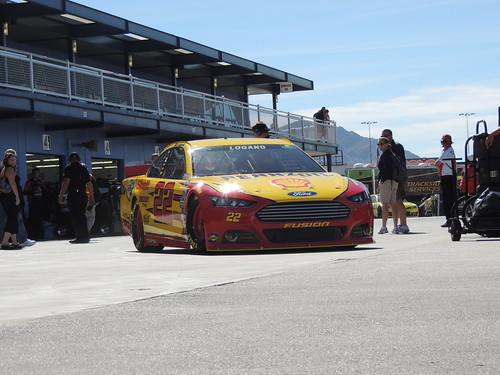 Joey Logano’s breakout season continued Saturday night at Bristol Motor Speedway as he won his third race of the 2014 season.

And as always, there were tempers lost, egos bruised, and lots of crumpled sheet metal trying to be positioned back into the haulers!

None of the top five fell out of contention this week.  However, positions two through five all swapped places in the finale. Only the leader and second segment winner, “A&M Aggie Sue”, held her position previous spot!

This week both Zee and Dawn successfully picked Joey Logano to win the Bristol race, thus scoring a cool 47 points.

Not very far behind “The Buschwacker” this weekend, scoring 39 points, is “Jeremy The Coach” and “Jim, aka Chiefy”, thanks to Kurt Busch’s fifth place finish.

Rounding out the top five in scoring this weekend is Marc.  Marc grabbed 37 points via Carl Edwards finishing in seventh spot.

Once again, in this final segment of segment number two, there was some players who had gigantic moves within the standings.  The largest movement, this week, came from both Doug and Lonna, each plummeting seven (7) places this week.  Doug finished up in 14th, and Lonna fell all the way to land in 15th spot.

Edie finished out this segment by dropping a dismal five (5) places, landing in 16th place.

Both “Jason The Latent  Tie Dye Hippie” and Carole fell four (4) spots finishing the segment in 17th and 18, respectively.

Positively speaking, both “Jim, aka Chiefy” and Marc had a very nice race rocketing up six (6) place on the ol totem pole, to finish in 9th and 10th, respectively.

Doug, Jr. finished out this segment by climbing up five (5) places to claim 14th place.

Finally, Brandon, “Dan the Numbers Cruncher”, and “David The Mudslinging Throttle Jockey” each ratcheted themselves up three (3)positions in the finale.

This week there were five players who were less fortunate in the scoring department!  That could only mean that those five players could only muster up a single digit score.  Edie, “Jason The Latent Tie Dye Hippie”, and “Leon Your Most Humble Sheriff” could only muster up nine (9) points this week.  However, there were two players who scored even less than that number.  Both Lonna and Carole, with the microscopic 5 points, share in this week’s “crappiest picks of the week”!

And let there be no doubt that the player who controlled “the throne” for the last two weeks, and who showed his scoring prowess by garnering a magnificent 9 points this week, has locked up his very first “Outhouse Award”!  That player would be none other that “Leon The Retired Airline Captian, Part-Time Cardiologist and Strawberry Picker, Former Elephant Driver, Your Most Humble Sheriff, and Now The Prince Of The Poophouse”!

Next week we all have a brand new start with the beginning of the third segment!  NASCAR moves it’s traveling circus to a place that I lived for six years back in the 1980’s, Atlanta.  In actuality the race track is really located South of the metropolitan area, down in Hampton, GA!

TIL NEXT TIME, PULL YOUR GLOVES JUP, FLIP YOUR VISOR DOWN, AND LET’S GO RACIN’!