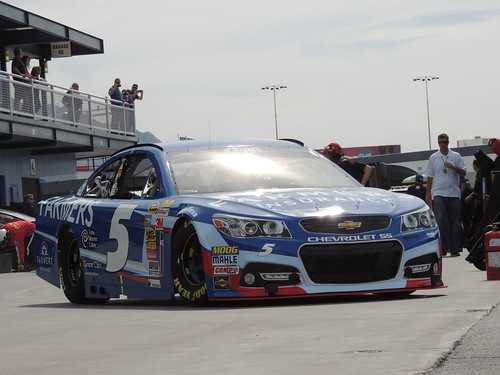 Just a side note for all to visualize: There were eleven (11) players from the Redneck Fantasy League hanging out at Calistoga and The Louie Vermeil Classic last weekend.  For the nine players who were not in attendance at Calstoga, and who may not know anything about this event, it is two nights of high quality sprint cars and midget racing on the West Coast.  This week there is four (4) days of the same at the Silver Dollar Speedway in Chico, CA, culminating in a two night World of Outlaws show!  Folks, you just don’t get any better racing than the last week and this week on the West Coast

With just two races left in “the regular season” Kasey Kahne dug deep and pulled off one of his most important wins of his career, the Oral-B 500 in Atlanta Sunday night. This win has, more than likely, cemented his team into a Chase birth for 2014!

Ol “Bernie The Bay Area Bandit” started off this segment very good with 43 points delivered by her choice, Matt Kenseth.

Even though “David The Mudslinging Throttle Jockey” did not have a good night of racing Sunday in the midget feature, he was rewarded with 39 points from Carl Edwards at Atlanta, as did “A&M Aggie Sue”.

By “sticking with the Biff, “Jerry The Buschwacker” was able to safely put 34 points into his point column this week!

Finally, rounding out the top five scorers for the week are Lonna and Marc. Each selected Dale Earnhardt, Jr., and for that they received 33 points.

This week there is a five-way tie for “the crappiest pick of the week”!  All five players scored the same single digit amount.  Edie, “Jim, aka Chiefy”, “Carlton The Doorman”, Carole, and “Jason the Latent Tie Dye Hippie” exhibited inability to select a winner, and for that they each secured a slim microscopic six (6) points!!

These same five players are all fighting for total control of “The Outhouse” this week, even though there is a deadheat for “The Outhouse”!  I guess you could say that you could throw a blanket over all five of them! Nevertheless, they must learn to share and take turns!  I can only say that It has got to be extremely crowded in that little “one holer” this week!

From Atlanta last Sunday, NASCAR moves up to Richmond next Sunday.  And Travis Tritt will attest, “it’s a long way to Richmond rollin’ North on 95”!