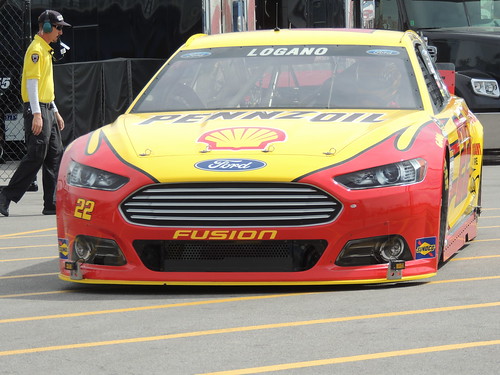 It appears that Team Penske has hit their stride just in time.  The first two races have been won by the two drivers that The Captain has in his employ, “Blazingly Bad” Brad Keselowski and ol “Sliced Bread”, Joey Logano. But the question of the week here at The Redneck Fantasy League is can Logano go back-to-back?

This week one fifth of the players, that would be four in number, have jumped on the Team Penske bandwagon.  Notwithstanding the fact that in Logano’s prior life as a Joe Gibbs Racing driver, he might have set a record for the most rollovers at Dover, Marc, Dawn, “Jerry The Buschwacker”, and “Leon, Your Most Humble Sheriff” all are of the opinion that Joey Logano can go back-to-back, and score his second victory in The Chase.

Almost as many players, three in all, Zee, Brandon, and “Doug, Jr., The Crown Prince of Kettle Corn”, all think that this is the week that “Mr. Six Pack”, Jimmie Johnson, breaks out of his late season funk and makes the statement that he is still a driver to be reckoned with this year.

Both Edie and “Jason The Latent Tie Dye Hippie” are hoping that the driver that has been a presence in almost every single race, many he could have won, absent the fact that his team suffered many mechanical failures can make it happen in the AAA 400 at Dover.  It has been noted in many races this year that Kevin Harvick was leading and/or dominating the race when mechanical failures befell the team.

Likewise “Karen The Highly Opinionated Southern Belle” and “Jim, aka Chiefy” are just plain hoping that the silenced Matt Kenseth can grab break, break silence, and get his very first victory of this year!  After scoring seven wins in 2013, and being the roaring lion, Kenseth has been a meek, silent lamb so far in 2014!

Lastly, “Bernie The Bay Area Bandit and Password Queen” and “Dan The Numbers Cruncher” think that Carl Edwards can emerge from his summer hibernation and secure his third victory of the season this weekend at “The Monster Mile”.

This week there are seven, nearly one third of the players, that are
“independent contractors”, and as such, are “In bidnez” for themselves!

Good luck to all!  I truly hope that your picks “don’t let you down”.

This week “Your Most Humble Sheriff” gets the opportunity to hang out at Las Vegas Motor Speedway for the Truck race with press credentials!  My affiliation with the web site On Pit Row comes this additional “good deal”! So, check this out, I actually get hang out with the press “big dogs”!  This will allow me to get great pictures for my web sites, as well as for On Pit Row.com!