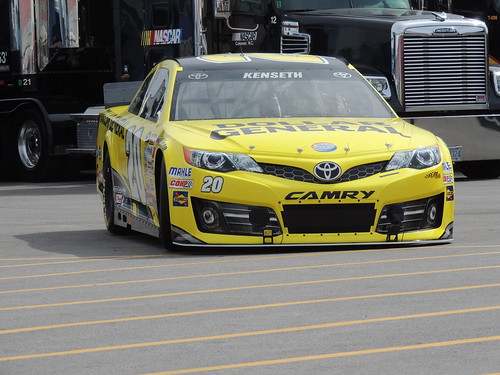 As NASCAR makes it trek in to the heartland of America, the Kansas Speedway, we are approaching the halfway point of this, the third and final, segment of the season.

It seems like we just started with the Daytona 500 just a few weeks ago!  Where has the time gone?  I know for me, the last four months just flew by!  It seems that just a few days ago I just packed up the ol RV to head out for Oregon for the summer, and now I am back already!

Nevertheless, there is now only seven races left in this season.

Even though Matt Kenseth has not visited the Winner’s Circle so far this year, there are five players that are hoping this week he breaks out of his year long slumber.  Those five players who are rolling the bones all for Kenseth this week are Zee, Dawn, Marc, “Doug, Jr. The Crown Prince of Kettle Corn”, and “Leon The Retired Airline Captain, Part-Time Cardiologist and Strawberry Picker, Former Elephant Driver, Current Outhouse Award Winner, and Your Most Humble Sheriff”.

Meanwhile, Carole, “Jeremy The Coach”, and “David The Mudslinging Throttle Jockey” are all pulling for Joey Logano  this week.  Each one of them are hoping that Logano can grab a win and propel his team to the next bracket.

Both Lonna and “Dan The Numbers Cruncher” are rooting for the experienced veteran, Mr. Four-Time, Jeff Gordon.

Lastly, Edie and “Jim, aka Chiefy” are both betting the JUNIOR NATION will be celebrating this Sunday in Kansas after Dale Jr. rolls into Victory Lane..

The unmentioned eight players have individual picks, and thereby they are “In bidnez‘ for themselves this week.

Just an update on the championship segment, now that there just seven races left.  As of this week the player who has scored the most points for the two and one half segments is Dawn with a total point accumulation of 984 points.

The third highest total belongs to Zee with 964 points.

Presently residing in fourth place in total points is “Leon Your Most Humble Sheriff” with a total of 948 points.

Rounding out the top five scorers is “Jeremy The Coach” with a total of 942 points.

As you can see the race for the championship money is no “runaway”!