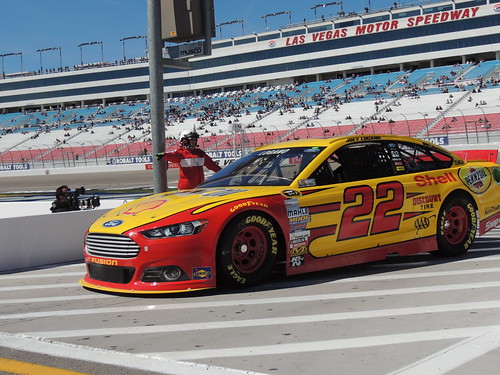 With his fifth win of the season at Kansas in the Hollywood Casino 400, Joey Logano just punched his ticket, guaranteeing his spot in the next round, The Eliminator Round of The Chase.

Logano led 122 laps for his fifth win of the season. The 24-year-old Team Penske driver came into this season with just three career Sprint Cup Series victories. He has recorded three wins in the past seven Sprint Cup races.

Three players had a great race this weekend!  Carole, “Jeremy The Coach”, and “David The Mudslinging Throttle Jockey” all were riding shotgun with Joey Logano Sunday, and grabbed the max points available for the race, that being 47 big ones!

Next on the scoring pylon this week are “Bernie The Bay Area Bandit and Password Wizzard” and “Doug the Former Mudslinger and Psychic, Turned Kettle Corn Dude”. Each of these individuals scored 42 points, “The Kettle Corn Dude” derived his points from Kyle Larson’s second place finish, and “The Password Wizzard” gathered her points from Kyle Busch’s recovery, and third place finish.

Also having a nice Sunday was “Jason The Latent Tie Dye Hippie”, who picked up 39 points for “The Rocket Man”, Ryan Newman’s, sixth place finish.

Even though “A&M Aggie Sue”, our current top dog on the totem pole, did not have a great day at Kansas, her 37 points from a Denny Hamlin’s seventh place finish contributed enough to her total to maintain her lead for still another week.

Rounding out the top five scorers for the week is a group of six players, which encompasses nearly one third of The Redneck Fantasy League.  “Doug, Jr. The Crown Prince of Kettle Corn”, Marc, Dawn, and “Leon The Retired Airline Captain, Part-Time Cardiologist and Strawberry Picker, Former Elephant Driver, Current Outhouse Award Recipient, and Your Most Humble Sheriff” all were rewarded 31 points from a thirteenth place finish by Matt Kenseth.  Both Lonna and “Dan The Numbers Cruncher” received their 31 points from a fourteenth place finish by Jeff Gordon.

There were only two players who maintained their previous week’s position, our leader “A&M Aggie Sue” and the tenth place holder, “Dan The Numbers Dude”, all other players moved around on the totem pole!

The three biggest movers on Sunday were Carole, Brandon, and “Karen The Highly Opinionated Southern Belle”, all moving four (4) spots.  Of those three, the only player that moved up was Carole, now in 14th place.  However, both Brandon and “The Highly Opinionated One” both plummeting down four spots in the standings landing in 15th and 16th, respectively.

Dawn, Marc, “Doug, Jr. The Crown Prince of Kettle Corn”, and “Jim, aka Chiefy” all slipped two (2) spots in the standings this week.

Not everyone fell down this week, “Jeremy The Coach”, “Jason the Latent Tie Dye Hippie”, and “Doug The Former Mudslinger and Psychic, Turned Kettle Corn Dude” each climbed up three (3) places on the totem pole.

Even though “Carlton The Doorman” did not score extremely well this week, his 26 points allowed him to climb up two (2) places, and that was enough to free him from the throne in “The Outhouse” this week!

Additionally, as I look at the standings as they now appear, I am extremely shocked to see our inaugural “Outhouse Award” winner, and perennial bottom dweller,“David The Mudslinging Throttle Jockey” gingerly sneaking into second place!  Normally David is down and dirty, covered in mud, and fighting for a place near the bottom!  Nevertheless. even though “The Mudslinging Throttle Jockey” can get up on the K-rail, he has never been guilty of getting out of the throttle!

This week there was a large mixture of scores.  Three players picked the winner.  But conversely, there were five players, that is one quarter of The Redneck Fantasy League, that scored in the single digits! Therefore, I have a plethora of choices in picking the player who truly showed a total lack of expertise in picking a winner this week!  However, there was only one player who scored just two (2) microscopic points this week, “Karen The Highly Opinionated Southern Belle”.  Therefore, “the crappiest pick of the week” is hers and hers alone!

Because Edie only scored six points this week, she evicted “Carlton The Doorman” from his temporary stronghold on “The Outhouse”, claiming her rightful place as “The Princess of The Poophouse”!

Next week NASCAR “is going to Carolina”, in particular, the Charlotte Motor Speedway.