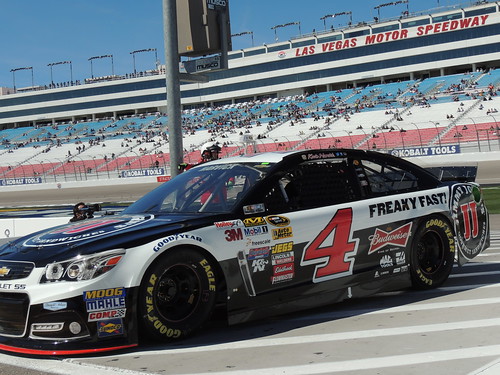 “By the time I get to Phoenix you’ll rising be rising” and possibly reading this post!

After the post race “old fashion blue collar butt whipping” that occurred last week at the Texas Motor Speedway, I am very excited to be spending the entire weekend at the Phoenix races.  I am also excited that I have received press credentials for this race, and will be down along pit road, the garage area, and where all the action will be!  Who knows, I may be in the middle of another pit road tussle!

Quite possibly I may have some good pictures of the shortened wheelbase of “Blazingly Bad” Brad’s blue deuce, after someone extracts their payback on BK!

This week there are four players, “Jim, aka Chiefy”, “Karen The Highly Opinionated Southern Belle”, “Doug, Jr. The Crowned Prince of Kettle Corn”, and “Leon Your Most Humble Sheriff” all of which were caught loading up their cars with cases of Bud this week.  Are they all power drinking this week or just trying to support their pick of Kevin Harvick?

Meanwhile, Lonna, Dawn, and “Carlton The Doorman” are putting all their marbles with the FedEx “Delivermenator”, Denny Hamlin this weekend.

Another strong candidate this week is Kyle Busch, or at least three players think so.  Those three players who are hoarding the M&M’s, and rooting for KyBu are Edie, Zee, and Carole.

Additionally, there are two players that are “sticking with The Biff” this week, “A&M Aggie Sue”. and “Jason The Latent Tie Dye Hippie”.

Lastly, “Jerry The Buschwacker” and Brandon are hoping that Carl Edwards can pull off one last win for the Roush-Fenway Racing team before he swaps his Ford out for a Joe Gibbs Racing Toyota next season..

That leaves, once again, six players that are totally “in bidnez” for themselves at Phoenix this weekend.

Good luck to all, and to all a good race!

TIL NEXT TIME, PULL YOUR GLOVES UP, FLIP YOUR VISOR DOWN,AND LET’S GO RACIN’!