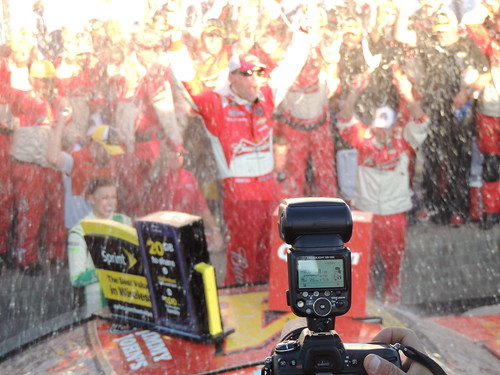 I am not sure if the drama from Phoenix International Raceway was felt through the TV, but as I walked through the garage area this past weekend, I could feel the tension in the air!   Additionally, it would be a gross understatement to say that Kevin Harvick, in his SHR #4 Budweiser Chevy, put on a driving clinic at the 2014 Quicken Loans Race for Heroes 500(k), and thoroughly dominated the other 42 drivers and teams!

Harvick drove the race like he was double parked!!

There were four happy players at the end of the Quicken Loans Race For Heroes 500(k), Sunday.  “Jim, aka Chiefy”, “Karen The Highly Opinionated Southern Belle”, “Leon Your Most Humble Sheriff”, and “Doug, Jr. The Crown Prince of Kettle Corn” all selected Kevin Harvick as their man for the race.  These four players all grabbed a very cool 48 points!

Also having a pleasant smile on his face Sunday evening was “Dan The Numbers Cruncher”, who  received 41 points from Matt Kensth’s third place finish.

The next three players, Dawn, “Carlton The Doorman”, and Lonna, had chosen Denny Hamlin to win the PIR race Sunday.  Each of those three received 40 points for Hamlin’s fifth place finish Sunday.

Rounding out the top five scorers this week were our current segment leader, “A&M Aggie Sue” as well as “Jason The Latent Tie Dye Hippie”.  Both of these players received 35 points for “sticking with The Biff“!

While our top two players, “A&M Aggie Sue”, and Dawn held sever in their positions, as well as “Carlton The Doorman” and Brandon, the single biggest mover this week was “Jeremy The Coach”.  “The Coach” plummeted six (6) spots, all due to his microscopic point gathering on Sunday!  He had selected Jimmie Johnson, a normally great choice, but the Johnson pick only returned a 5 point reward Sunday.

The remaining players either moved or down one or two spots this week.

The Race For The Redneck Fantasy League Championship

With just one race remaining here is how the top five scorers line up for total points scored over the three segments:

Remember this pot is a winner take all!

This week’s “crappiest picks of the week goes to “Doug The Former Mudslinger and Psychic, Turned Kettle Corn Dude”.  “The Kettle Corn Dude” was only able the to score 4 points.  I guess he failed to receive the memo that the HMS #48 team was not having a very sterling Chase!

Notwithstanding Doug’s bad luck, Edie, made a return trip to the crapper.  She has a twelve (12) point lead over her closest rival for the throne, one of her cohorts in crime, “Karen The Highly Opinionated Southern Belle”.

This weekend is Ford Championship Weekend at Homestead.