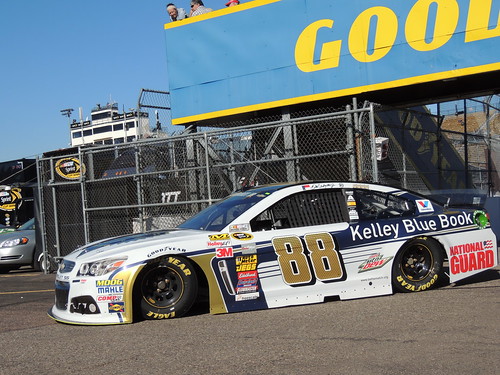 Sadly, at least for me, we are entering the last week of the NASCAR race season.  Where did the time go this year?  It is now time for the Ford Championship weekend at Homestead-Miami Speedway.Having been to Homestead about ten years ago for this great weekend of racing, I can tell you the intensity and the pageantry will be dialed up to 10 on your fun meter this weekend!

Our Final Picks For The Year

By looking at the picture that leads the post, it is very apparent that the big choice of the players happens to be Dale Earnhardt, Jr.!  This week one quarter of The Redneck Fantasy League, four players, are on the Dale Jr. bandwagon at Homestead.  Those four players are Zee, Dawn, “A&M Aggie Sue”, and “Doug, Jr. The Crown Prince of Kettle Corn”.

There are four drivers that have two players each in their rooting section this week.

Edie and Brandon are really hoping that Tony Stewart can awake from his season long slump, win the race at Homestead, thus keeping his 15 season win streak alive of at least one win in each of those years.

Carole and Marc are also hoping that Jimmie Johnson can rebound from a very disappointing performance at Phoenix last weekend.

Likewise, “Bernie The Bay Area Bandit and Password Queen” and “David The Mudslinging Throttle Jockey” are hoping that “Blazingly Bad” Brad Keselowski can remove the bullseye located on his rear deck, that appears to be larger than Target logo on Kyle Larson’s Chevy.  Additionally, these two players are hoping that Brad K. can avoid being impaled on the retaining wall, spun out, or other catastrophic consequences that put him back into his hauler in a pile of crumpled sheet metal!  After the race at Texas and all the other ill advised antics that have surrounded Keselowski, could it be that he is “wanted dead or alive”?

Lastly, Carlton the Doorman” and “Leon Your Most Humble Sheriff” are betting the farm that Jeff Gordon can end the season one position better than he finished at Phoenix last week.

For the remaining seven players, with their individual choices for Homestead, they are “in bidnez” for themselves!