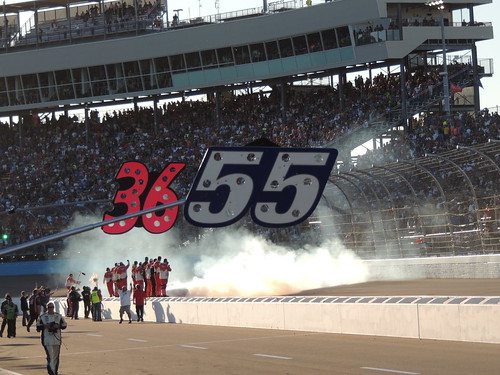 How can a season end with more drama and excitement than what was witnessed at Homestead?  If that race did not hold your attention, then I am not sure what it will take!  Not only did Kevin Harvick win the 2014 Sprint Cup championship, but he also won the race.  It just does not get any better than that for creating drama.

Lonna was the only player to pick Kevin Harvick to win the race at Homestead.  For her foresight, she received  43 points, and was the highest scorer this week.

Both “David The Mudslinging Throttle Jockey” and “Bernie the Bay Area Bandit and Password Queen” selected “Blazingly Bad” Brad Keselowski, even though he could have been stuck in the fence by any number of drivers this week!  Keselowski’s 3rd place finish gave these two players 41 points to end the season.

When I saw that my son, “Jeremy The Coach”, had selected the son of a billionaire, Paul Menard, for this race, I questioned his sanity!  However, his choice of Menard came through for him with a cool 40 points.

The fourth highest scorer this week are “Doug The Former Mudslinger and Psychic, Turned Kettle Corn Dude”.  “The Kettle Corn Dude” picked Matt Kenseth and was rewarded 38 points for his 6th place finish at Homestead.

Rounding out the top five scorers this week is “Carlton The Doorman” and “Leon Your Most Humble Sheriff”, each grabbing 36 points for Jeff Gordon’s 10th place finish.

And as you may have noticed if you checked the results page, “A&M Aggie Sue” did it to us once again!  She won the second and third segments this year!  That is pretty darrn cool!  We need to watch out for this sneaky player next year!

The tpo five for segment three are:

5.  “Leon Your Most Humble Sheriff”

The Chase winner was “Bernie The Bay Area Bandit and Password Queen”.

This week there were four players who were only able to score a single digit!  “The crappiest pick of the week’  happens to be given to two players who tied for this award.  Both Edie and Brandon selected Tony Stewart, and you know what they say, “where there is Smoke, there is fire’!  Well both Edie and Brandon got burned with Smoke this week.  Stewart was the first car out of the race giving both of these players just 1 skimpy point this week!

The one (1) point that Edie scored was just enough to land her solidly in “the crapper” just in the nick of time!  So it is that Edie gets to have “The Outhouse Award” proudly placed near her TV for the entire off season!

On a positive note:  It is just 93 days and a wake up call til the Sprint Cup cars roll out on the track the the Duel 150’s in February!

Til February rolls around I guess this past Sprint Cup season will just be “Gentle On My Mind”!