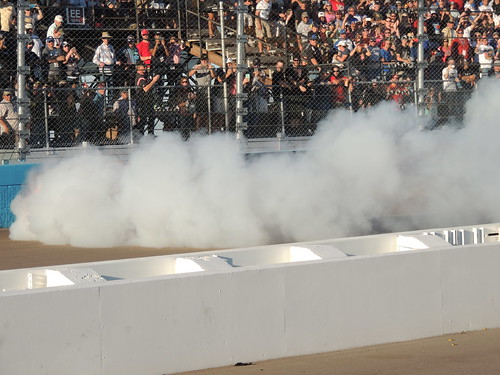 Now that I am deep into my annual NASCAR withdrawals, I thought that this would be great time to look back and analyze some of the trends and statistics from our 2014 fantasy league.  Some of these stats will be quite interesting, some may be humorous, and may even surprise some of us.

Let’s look at the top five scorers for the year and see how they performed on the average, week in and week out.

The highest scoring player, and winner of the “Championship Award”, was Dawn, who completely had us covered all year long!  Dawn quietly racked up a total of 1,213 points for the three segments!  She was in the money every segment, finishing second place in all three segments!  That, my friends, is putting up the big numbers on the ol totem pole every single weekend, and kicking out collective butts!

If you want to break it down, Dawn averaged scoring 33.64 points for every week during the 36 races.  That works out that her pick finishes with an average 10th place weekly.  That is outstanding to average that number with your picks, consistently, week in and week out!

Second on the scoring pylon was “A&M Aggie Sue”, who did not do too badly for herself, either.  Sue scored a very respectful 1,168 points for the year.  Once again, that is an average of 32.44 points each week for the 36 race season.

The third highest scorer for the year was “Jeremy the Coach”.  “The Coach” racked up an impressive 1,125 points.  That number works out to average 31.25 points per race.

Just three points behind “The Coach” was his aunt, Zee.  Zee performed for much of the season under the radar, but nevertheless, she tallied up a cool 1,122 points to hold down the fourth highest score for the year.  That point total comes out to an average score of 31.16 points per race.

Rounding out the top five point getters is “David the Mudslinging Throttle Jockey”. The midget chauffeur was able to collect a total of 1,097 points. That total equates to an average of 30.47 points per race.

I went through the data base and extracted some other rather interesting tidbits!  An interesting stat was how many weeks did some of our players sit atop of the standings this season.

“A&M Aggie Sue” sat on top of the totem pole the most weeks of any player.  Sue had a total of twelve (12) weeks at the top of the standings. That is one third of the season that she was our point leader, or shared in the point lead!

Meanwhile, Dawn, our 2014 “Championship Award” winner, was at the top of the points, either solely or jointly, for a total of nine (9) weeks this season.

Not doing too badly in that category was “Jeremy The Coach” who was our leader, jointly or solely, for a total of seven (7) weeks.

Adding to the Lutz’ legacy this year was her hubby, “Carlton The Doorman”, who was or shared the lead for five (5) weeks!  That also including being first on the last week of segment number one, giving him the win for the segment!

“Bernie The Bay Area Bandit and Password Queen” spent four (4) weeks as our points leader during the course of the year.

Zee spent two (2) weeks as our points leader in the first segment.

Additionally, “Karen The Highly Opinionated Southern Belle”, Brandon, and “David the Mudslinging Throttle Jockey” each spent one week in the lead during the course of the year.

Now, for a comparison, we can examine the scores of the bottom five scoring players for 2014.

Not too far behind Edie in total points scored is “Jerry The Buschwacker”, whose total was 985 points.  Jerry’s average per race score of 27.36 points per race was only marginally better than the score that Edie posted for the year.

Next was “Jason The Latent Tie Dye Hippie”, who only minimally etched out a better total score than “Jerry The Buschwacker”!  “The Tie Dye Dude” achieved a grand total of 993 points.  If you divide 993 by 36, you will come up with an average of 27.58 points per race for the ol “Tie Dye Dude”!

Number four on the lowest scores for the year is Carole.  Carole accumulated 1,006 points for the year.  That number of 1,006 will give you an average score for the 36 races of 27.94 points.

Rounding out the five lowest scorers of the year is “Jim, aka Chiefy”. “Chiefy” was able to gather up 1,038 points which turns out to be an average of 28.83 points per race.

Since I discussed the individuals who spent time at the top of the point list, it is only right that I list and discuss the players who lived at, or near, the bottom of the list as well!

It is no surprise that Edie had an off-season in regards to points scored. She led the list with an unprecedented ten (10) weeks occupying “The Outhouse”!

Not too far behind Edie was “Jason The Latent Tie Dye Hippie” with seven (7) weeks as “Prince of The Poophouse”.

Both “Karen The Highly Opinionated Southern Belle” and “Carlton The Doorman” each spent four weeks squarely positioned atop of the “The Throne”!

Meanwhile, “Jerry The Buschwacker” spent three (3) weeks there and “Leon Your Most Humble Sheriff” accumulated two (2) weeks guarding the front door of “The Outhouse”!

Lastly, Zee, Carole, and “Jim, aka, Chiefy” each logged one transitory week at the bottom of the list.

There, my friends, you have some of the stats that have been accumulated for this year in The Redneck Fantasy League!

With just 86 days and a wake up call til the Daytona 500, I know that “the Sun will come out tomorrow, bet your bottom dollar that tomorrow there will be Sun!”