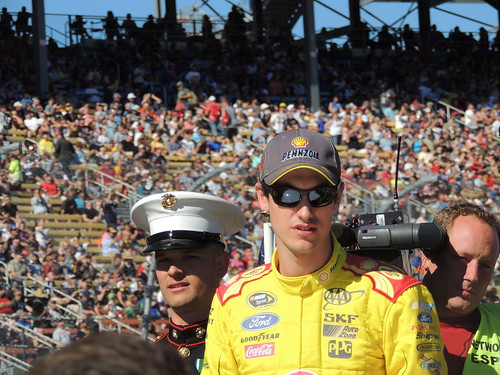 Joey Logano won Sunday’s Daytona 500 when a wreck brought out a caution just after “The Kid” had taken the white flag on a green/white/checkered restart at Daytona International Speedway.

There was only one player who picked Logano to win the race this week, “Jerry the Buschwacker”!  So he was able to start off this new season with a very cool 47 points!

The list of players that scored the second highest amount of points for this race number twelve players!  Ten players were rooting for Dale Earnhardt,Jr., and those players are “Carlton The Doorman”, “Karen The Highly Opinionated Southern Belle”, “Doug Jr., The Crown Prince of Kettle Corn”, Zee, Linda, Carole, “Cole The Natural”, “Leon Your Most Humble Sheriff”, and lastly because he is always last in uploading picks, “Jason the Latent Tie Dye Hippie”.  Those ten players started off the season with 42 big points!

There were two players,  “Jeremy The Coach”, and “A&M Aggie Sue”,who also scored 42 points this week with their choice of Kevin Harvick!

“David The Mudslinging Throttle Jockey” picked Clint Bowyer and did might fine with a first week tally of 37 points.

And rounding out the top five in scoring this week was Marc with 23 points from Danica Patrick!

Well after winning “The Outhouse Award” for the 3rd segment last year, it appears that Edie has started out right where she left off!  With her microscopic 3 points from “Blazingly Bad” Brad Keselowski’s 42nd place finish, she has garnered the very first “crappiest picks of the week” award!

Next week NASCAR moves it’s roadshow Northwest about 365 miles to Hampton, GA, to the Atlanta Motor Speedway.  Hopefully the weather will improve markedly, and have a great racing weekend!

TIL NEXT TIME, PULL YOUR BELTS UP, FLIP YOUR VISOR DOWN, AND LET’S GO RACIN’!