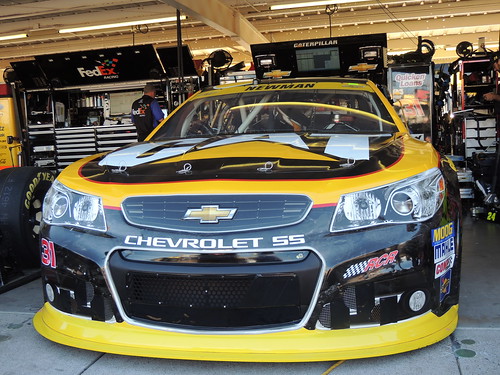 This weekend NASCAR will be in Hampton, GA, about 25 miles SE of downtown Atlanta, at the Bruton Smith owned Atlanta Motor Speedway.  As of this writing, Weds. 9:10 pm EST, the locals are freezing the buttocks off! Presently it is 34 degrees with a 90% chance of rain for the rest of the night. The weather for the next five days will be 48-52 degrees, and on Sunday there will be a 40% chance of rain and possibly snow.  After living in the southern suburbs of Atlanta for 6 years back in the 80’s, this is the normal Atlanta February weather.

As you can surmise by the accompanied picture, Ryan Newman has the nod by our players for The Folds of Honor Quik Trip 500.  The four players that are riding shotgun with Newman this weekend are Dawn, “Doug, Jr. The Crowned Prince of Kettle Corn”, “Bernie The Bay Area Bandit and Password Queen”, and “Jason The Latent Tie Dye Hippie”.

Three players players were seen hanging around their local Farmer’s Insurance office obviously hoping to get a glimpse of Kasey Kahne.  Those three individuals are “Jim, aka Chiefy”, “Cole The Natural”, and lastly “Dan The Numbers Cruncher”.

Both Edie and “Doug The Former Mudslinger and Psychic, Turned Kettle Corn Dude” are trying to figure out just what is Arris, the sponsor for their driver Carl Edwards!

Additionally, Zee and “Karen The Highly Opinionated Southern Belle” are hoping the the drive for five is still alive for their driver this week, Jeff Gordon.

And rounding out the group is Carole and “Leon Your Most Humble Sheriff”, who were seen this week shopping at their local Dollar General Store.  Coud that be because they were trying to help their driver for Atlanta, Matt Kenseth?

There are nine players this week that have individual picks.  That can only mean one thing, they are in bidnez for themselves at Atlanta!