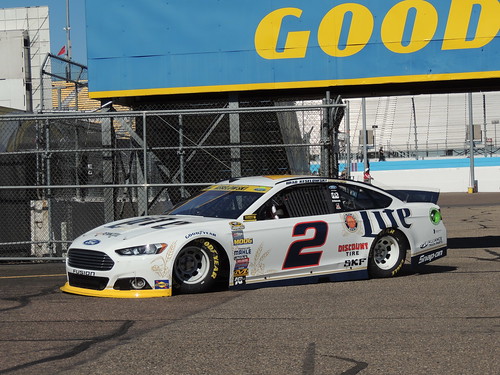 This weekend begins the first “Western Swing” for NASCAR in 2015.  The Western Swing, Las Vegas, Phoenix, and Auto Club Speedway, starts when the haulers roll up Las Vegas Blvd and pulls into the Las Vegas Motor Speedway on Thursday evening in anticipation of the Kobalt 400 Sunday.

This week one quarter of the players, six in total, are unanimous in their choice for the Kobalt 400 at the Las Vegas Motor Speedway!  Dawn, “Karen The Highly Opinionated Southern Belle“, “Doug,Jr. The Crown Prince of Kettle Corn”, Carole, “Jason The Latent Tie Dye Hippie”, and yours truly, “Leon Your Most Humble Sheriff”, were all observed, by The Redneck Fantasy League Staff Private Investigator, having a shouting match while pounding down a few gallons of Miller Lite!  It went back and forth between the rival groups shouting “tastes great”, while the other side would respond with “less filling”!  I guess it was all in good clean fun while supporting their driver for Vegas, Brad Keselowski!

Not to be outdone this week, “Lonna The Quilt Angel”, “Cole The Natural”, and Brandon have been seen by that same P.I. hanging around at their local Lowe’s store.  Do you really think that all three of these players are really into a “Do-It-Yourself” project this week?  Or quite possibly do you think that they were hoping to get a sneak peek of their Las Vegas choice, Jimmie Johnson, possibly doing a pre-race appearance  in their hometown?

Additionally, “Carlton The Doorman”, “A&M Aggie Sue”, and “Dan The Numbers Cruncher” all were seen pushing shopping buggies at their Dollar General Store on Tuesday, and loading up that cart with goodies for their Sunday afternoon race day party in support of Matt Kenseth.

Lastly, and most unlikely, “Jim. aka. Chiefy”, and “Doug The Former Mudslinger and Psychic, Turned Kettle Corn Dude” were seen carrying a Target shopping bag from their car back into the houses.  A coincidence?  Not likely!  These tow have chosen “Young Money”, Kyle Larson, to take home the hardware from Las Vegas!

That leaves eight players this week who have individual choices, and that can only mean that those eight are definitely “in bidnez” for themselves this week!