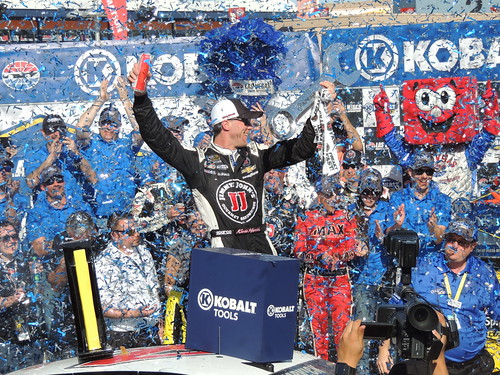 Kevin Harvick, who posted runner-up finishes in the first two Sprint Cup Series races of the season, won Race No. 3 on the 2015 schedule by dominating at Las Vegas Motor Speedway on Sunday.

There has been three races and three different winners so far in 2015.

None of the players were strategic enough to have “Happy” Harvick on their Las Vegas resume this week.  However, “Jeremy The Coach” was foresightful enough to select Martin Truex, Jr. as his choice, and was the highest scorer of the weekend.  “The Coach” grabbed a very nifty 43 points for Truex’s second place finish, and that score launched him onto the top of the totem pole for week three!

There was a gaggle of players, six to be exact, that were the second highest scorer of the week.  Dawn, “Karen The Highly Opinionated Southern Belle”, “Leon Your Most Humble Sheriff”, “Doug, Jr. The Crown Prince of Kettle Corn”, Carole, and finally, “Jason The Latent Tie Dye Hippie”, all racked up 38 points for “Blazingly Bad” Brad Keselowski’s seventh place finish.

Another group of five players had a very nice Las Vegas race.  “Carlton The Doorman”, “A&M Aggie Sue”, and “Dan The Numbers Cruncher” all were rallying around Matt Kenseth today.  “Jim, aka Chiefy”, and “Doug The Former Mudslinger and Pyschic, Turned Kettle Corn Dude” were riding shotgun with “Young Money”, Kyle Larson today.  All five of the previously mentioned players all logged 36 points.

Marc had selected the 2015 Daytona 500 winner, Joey Logano, and although he led a lot of laps early in the race, he wound up finishing 10th and gave him 35 points Sunday.

Rounding out the top five scorers in week three is Linda with 27 points from Kasey Kahne’s 17th place finish.

The single mover this week is Marc.  Marc rocketed out of “The Outhouse” like a man with his posterior on fire, and moved up six (6) spots this week!

We have a group of three players who plummeted five spots this week.  It seems that “Cole the Natural”, “Lonna The Quilt Angel”, and “David The Mudslinging Throttle Jockey”, all three had a rotten week at the races!

Another group of three had a good week at the races.  “Karen The Highly Opinionated Southern Belle”, “Jim, aka Chiefy”, and Edie climbed up the ladder four places after the race in Las Vegas.

Both Zee and “Doug The Former Mudslinger and Pyschic, Turned Kettle Corn Dude” each moved three places, however, they went in opposite directions!  Doug moved up and Zee crashed down!

Both Brandon and “Bernie The Bay Area Bandit” each dropped two places in the standings this week.

There was a really close race fro this week’s “crappiest picks of the week”! But Zee beat out both Brandon, “David The Mudslinging Throttle Jockey”, and “Cole The Natural” by only scoring 3 skimpy points!

Lastly, we have a new “Prince of The Poohouse”!  Brandon now sits squarely on the throne, and is firm control of “The Outhouse” this week!

Next week NASCAR, and yours truly, moves over to Phoenix for the next stop on the Western Swing!  And contrary to what Jamie O’Neal says, there really is an Arizona!