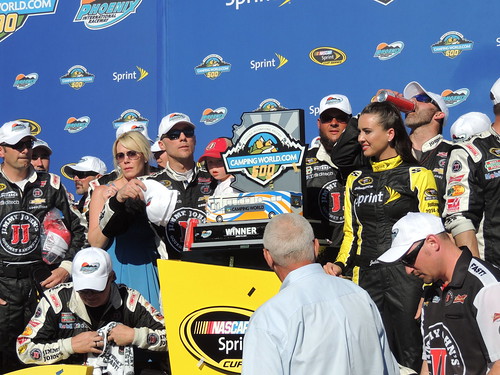 Kevin Harvick survived a couple of late restarts and tires older than many of those chasing him to win Sunday’s CampingWorld.com 500(k) race at Phoenix International Raceway.

The victory was the second in a row and gave the defending series champion two victories and two runner-up finishes in the first four races of the 2015 season. Harvick led a race-best 224 laps in his Stewart-Haas Racing Chevrolet.

This week we, as players, are hitting our stride.  There were five players who picked that “Freaky Fast” Kevin Harvick to win the race.  And with their choice of Harvick Sunday Dawn, Brendon, “Jason The Latent Tie Dye Hippie”, “Doug The Former Mudslinger and Psychic, Turned Kettle Corn Dude”, “Jim, aka Chiefy”, and yours truly, “Leon Your Most Humble Sheriff” all made bold moves up on the totem pole! Each of these five players racked up 48 huge points this early in the segment!

In another semi-bold move this week Carole put her whole Social Security check on the middle linebacker of NASCAR, Ryan Newman.  She went where no other player was willing to go this week, and it paid off very handsomely for her, with a very cool 41 points from Newman’s third place finish.

Additionally, our resident doorman, “Carlton The Doorman”, snuck into the fray this week by logging 39 points from the efforts of “Blazingly Bad” Brad Keselowski’s sixth place finish.

And rounding out our top five scores for the week is the Peachtree City, GA resident “Karen The Highly Opinionated Southern Belle”, getting 37 points from Joey Logano’s seventh place results.

This week the old totem pole looked like a nuclear bomb struck it!  Only four players out of our twenty two remained in their previous position!  That means that there was, as Jerry Lee Lewis sang, “a whole lot of shakin’ goin’ on”!

There were two players, “Jim, aka Chiefy” and “Dan The Numbers Cruncher”, who were the biggest movers of the week.  “Chiefy” rocketed up the standings five places this week, landing in 10th place.  Meanwhile “The Numbers Dude” plummeted five spots to 14th position while his pick of Dale Earnhardt, Jr’s car went up in flames on pit road Sunday!

There were seven players who either moved up or down three spots!

First with the positive gainers of the week.  Dawn, “Jason The Latent Tie Dye Hippie”, “Doug The Former Mudslinger and Psychic, Turned Kettle Corn Dude”, “David The Mudslinging Throttle Jockey”, and Brandon all climbed up the ladder three places to reside this week in  3rd, 4th, 17th, and 19th respectively.

Rounding out the to five movers for the week are “Carlton The Doorman” and “Lonna The Quilt Angel”.  The carpet was pulled out from under their feet this week with their mediocre results at Phoenix, landing in 5th and 22nd places respectively!

This week there was really no question as to who would win “the crappiest pick of the week”!  Our resident accountant, “Dan The Numbers Cruncher” really had an off week!  Just like the old Cheech and Chong movie “The Numbers Dude” watched his day go “Up In Smoke” only scoring 1 microscopic point at PIR!

However, that score of just one (1) point was not enough to send him to “The Outhouse”, oddly enough.

This week we have, I believe a first-timer, that is firm control of “The Outhouse”! This week it is Lonna who is squarely entrenched on the throne by 11 points ahead of her closest competitor, Zee.

The traveling circus, better known as NASCAR continues on it’s final race of the Western Swing, Auto Club Speedway in Fontana,CA.  So for those who have aspirations of climbing out of the hole that they are in, it is time for some “California Dreamin”!