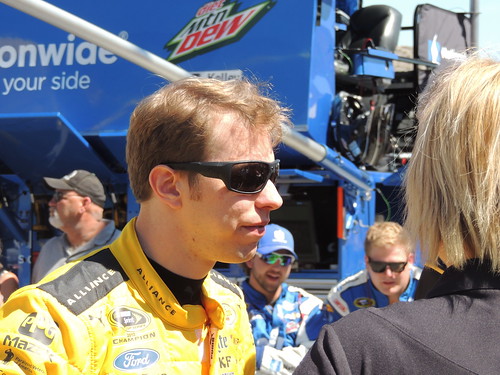 There is an old 1972 Albert Hammond song, “It Never Rains In Southern California”, that Kurt Busch may be singing after the race. The song concerns the struggles of an actor who moves out to California to pursue a career in Hollywood but does not have any success and deteriorates in the process. In the chorus, Hammond sings, “It never rains in California, but girl don’t they warn ya. It pours, man it pours.”

Well for Kurt Busch today, who looked like a shoe-in to win the Auto Club 400 in just his second race since returning from a NASCAR indefinite suspension, it didn’t just rain, man it poured!

Instead, “Blazingly Bad” Brad Keselowski committed a strong armed robbery at Auto Club Speedway, muscling his car into the lead on the second green-white-checkered restart.   That bold move propelled Brad K. into the lead with just one lap to go, giving Keselowski his first victory in 2015, and locking him into 2015 The Chase.

The big winners this weekend were Marc, “Jim, aka Chiefy”, and “Doug The Former Mudslinger and Psychic, Turned Kettle Corn Dude”.  All three of these players were riding shotgun with “Blazingly Bad” Brad Keselowski at Auto Club Speedway, and thereby scoring 47 points!

Not doing too badly this week, as well, was “Bernie The Bay Area Bandit and Password Queen”.  “The Password Queen” was chowing down on a Jimmy John’s sub sandwich and rooting for Harvick all race, all the while racking up a nifty 43 points!

Additonally, Zee had a nice afternoon, scoring a cool 37 points through the efforts of a Joey Logano 7th place finish.

And rounding out the top five scorers this week, gathering up 30 points from Tony Stewart’s 14th place finish, are “Lonna The Quilt Angel”, “Dan The Numbers Cruncher”, and yours truly, “Leon The Retired Airline Captain, Part-Time Cardiologist and Strawberry Picker, Former Elephant Driver, and Your Most Humble Sheriff”.

Only four of the players remained status quo in their position on the scoring pylon this week.  That means that eighteen players traded places after the race at Fontana, CA!

The single biggest mover this week is “Cole The Natural”.  It seems that his pick, “The Dinger” did not fare too well this week.  “The Natural” was only to gather up 10 points, and that total allowed him to plummet six (6) spots, landing firmly in “The Outhouse” this week!

There were two players who managed to move five (5) places.  Marc was fortunate enough to be on the positive side of the movement scale, climbing up to rest this week in 15th place.  Conversely, Edie dropped like a bad habit five (5) places to reside in 20th spot this week.

Zee had a good week, climbing up four (4) positions to sit in 17th place after Fontana.

Likewise, Carole ratcheted up three (3) places to sit in third place this week.

The remaining twelve players moved up or down either one or two spots this week.

This week “Cole the Natural” get his first taste of getting roasted!  It seems that “The Natural” thought that A.J. Allmendinger would have a good day at Auto Club Speedway.  That was not to happen for him today.  “The Dinger” finished in 34th place, only yielding 10 microscopic points for Cole today! Those 10 lousy points was enough for Cole to be awarded “the crappiest pick of the week”!

If that was not enough to deal with this week for “Cole The Natural”, those 10 points today was enough to position him squarely on the throne, and in firm control of “The Outhouse” this week!

Next week NASCAR takes it’s road show to the smallest track on the circuit in Martinsville, VA, better known as “the paper clip”.  This track is .524 miles in length, and looks exactly like a paper clip!