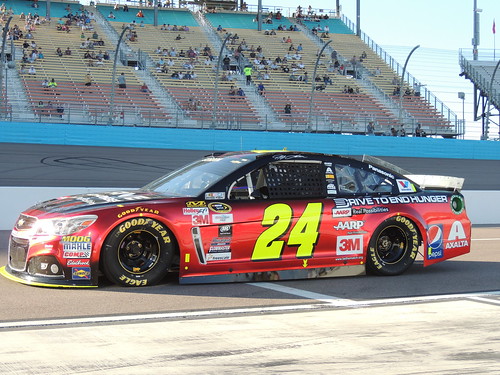 This week NASCAR moves to the smallest, slowest, and oldest track on the schedule, Martinsville.  For those who are interested to know the history of the race track, check out the history of Martinsville Speedway that I have compiled!

For the second week in a row the majority of the players, six in all and obviously different players than from last week, have chosen “Mr Four-Time”, Jeff Gordon as the race favorite. This week “Lonna The Quilt Angel”, “Cole The Natural”, his Dad “Jeremy The Coach”, “Jason The Latent Tie Dye Hippie”, “Doug Jr. The Crown Prince Of Kettle Corn”, and yours truly, “Leon Your Most Humble Sheriff” have all selected “Mr. Four-Time”, hoping that he can pull off a victory in his next to last race at this paper clip!

There were almost as many players that are high on “The Deliveranator”, Denny Hamlin this week!  The five players who are solidly behind the JGR #11 FedEx Toyota are “Karen The Highly Opinionated Southern Belle”, “Jim, aka Chiefy”, Edie, “David The Mudslinging Throttle Jockey”, and Brandon.

Lastly, there are three players who think that the 2015 Daytona 500 winner “Sliced Bread”, Joey Logano, can bring home the hardware, which is always the coveted special grandfather clock built especially for the race winner!  This week Linda, “A&M Aggie Sue”, and “Dan The Numbers Cruncher” are riding shotgun with the Team Penske #22 Shell/Pennzoil Ford and Logano!

Once again this totals 14 players, which coincidently seems to be the magic number lately of players, that join forces each week!  Doing the math, that leaves eight players this week who are the so called independent thinkers. But, as well all know, those independent thinkers are really “in bidnez” for themselves!

And as I always caution before every short track race, I hope the drivers check the egos, their tempers, and above all, their weapons at the pit gate! As we all know there will be bruised egos, lost tempers, and lots of crumpled sheet metal by Sunday evening!  So I caution all the drivers, “keep your hands to yourself”!