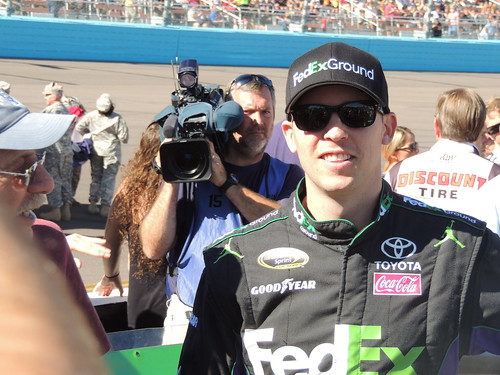 Denny Hamlin took the lead from Matt Kenseth with 30 laps to go, held off Brad Keselowski over the final 20 laps, and went on to win the STP 500 race at Martinsville Speedway.

This week there were five players who scored the max points available for the week.  “Karen the Highly Opinionated Southern Belle”, “Jim, aka Chiefy”, Edie, “David The Mudslinging Throttle Jockey”, and Brandon, all were rooting for “The Delivernator”, Denny Hamlin to bring home the Martinsville grandfather clock Sunday, and that gave them 47 points.

Second on the scoring pylon this week with 42 points are Linda, “A&M Aggie Sue”, “Bernie The Bay Area Bandit and Password Queen”, and “Dan The Numbers Cruncher”.  This whole group was wholeheartedly behind Joey Logano!

Additionally, there is a group of six players who selected Jeff Gordon this week.  “Lonna The Quilt Angel”, “Jason The Latent Tie Dye Hippie”, “Jeremy The Coach”, “Cole The Natural”, “Doug Jr. The Crowned Prince of Kettle Corn”, and yours truly, “Leon Your Most Humble Sheriff” all logged a nifty 36 points this week.

Rounding out the top five scorers of the week was “Jerry The Buschwacker”, who had selected Kasey Kahne, and was awarded 34 points.

There were only six players that did not move, either up or down, this week! That means that there were 16 players who did change places this week.

There were two players who had the largest movement this week.  “Jim, aka Chiefy” rocketed up the totem pole five places landing in 4th place this week. Conversely, Carole plummeted five places falling to 8th place after Martinsville.

Both “Carlton The Doorman” and Zee stumbled falling three places this week residing now in 10th and 20th places, respectively.

Unfortunately, even though “Cole The Natural” successfully scored 36 points this week, it was not enough to extract him out of “The Outhouse” after the Martinsville race. So for the second week in a row, “The Natural” is still solidly “The Prince of The Poophouse”!

Next week is Easter, and NASCAR will be taking that weekend off.  The next race on the schedule will be Texas Motor Speedway in two weeks.