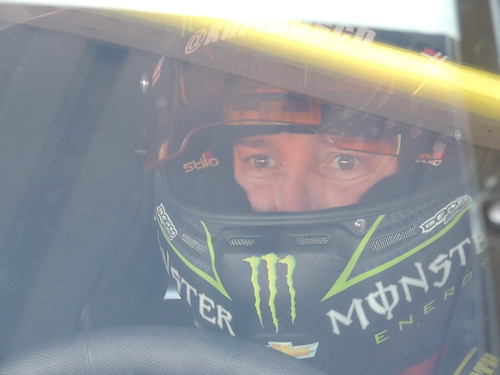 It is the halfway point in the first segment of our fantasy league and NASCAR has week off from racing.  Since the Easter break is upon us, and NASCAR has an off week, this would be a good time to recap the segment and regroup for the remaining six races!

Daytona started things off with a huge bang!  Twelve of our players, more than half of the fantasy league, were riding shotgun with Dale Earnhardt, Jr., and were rewarded very handsomely with 42 points for his second place finish.  Leaving Daytona it was very crowded at the top of the totem pole.

However, the following week at Atlanta some of the wheels began to fall off of the wagon for a few of the players.  Both Zee and “Karen The Highly Opinionated Southern Belle” fell out of that huge tie for the lead, and Marc tripped and stumbled as well, all of them with single digit scores at Atlanta.

Las Vegas Motor Speedway was an excitingly fun weekend for yours truly. It was the first weekend of possibly four races this year that I received media credentials. Additionally, LVMS saw five of our players, that is one quarter of the total, have a catastrophic scoring weekend, logging only a single digit results!

The next weekend at Phoenix International Raceway, I had media credentials in back-to-back weekends.  The Redneck Fantasy League saw a great improvement in the overall success of the players.  Only our resident CPA, “Dan The Numbers Cruncher” lacked any luck or success, scoring a whopping one (1) point that weekend!

The following week at Auto Club Speedway in Fontana, CA, the scores improved. Nevertheless, “Cole The Natural” was the lowest scorer of that week, he was able to barely inch above the single digit mark, scoring 10 points, and those 10 points landed him squarely in “The Outhouse”!

Finally, last weekend the single digit bug attached itself to Carole!  She was rewarded with just 9 points for Johnson’s bad day at the office.

Looking on the positive side of the scorecard there were many great days! Let’s take a moment to look at our present top five leaders.

I hope that you all have an enjoyable Easter and will be ready to get back after it next week!

After all we all are “running down a dream” in the fantasy league!