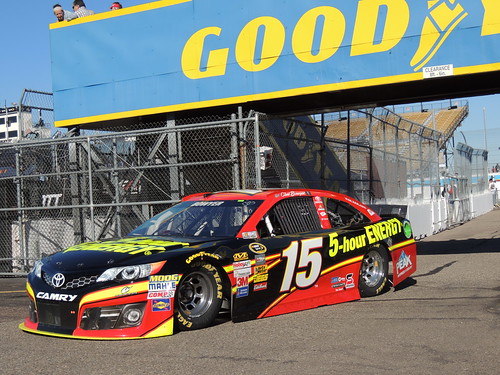 After having last week, Easter, off the traveling circus known better as NASCAR does to two-step into the Dallas-Ft. Worth metroplex area this weekend.  To be more specific, both the Xfinity and Sprint Cup Series will be letting the big dog eat at the Texas Motor Speedway.

This week there are three drivers who have a rooting sections consisting of three players each, which makes them the Texas favorites this week.  The first group of three players consist of “Jerry The Buschwacker“, “Doug The Former Mudslinger and Psychic“, as well as “Karen The Highly Opinionated Southern Belle”.  All three of these players were noticed loading up their shopping baskets with many cases of 5-Hour Energy drink this week, probably hoping that any of their purchases may help propel their driver, Clint Bowyer, to a victory at Texas.

Likewise, Dawn, Edie, and “Doug Jr. The Crowned Prince of Kettle Corn” were observed secretly sliding into their local Lowe’s this week loading up on various DIY and home improvement items over the weekend.  Who are they kidding?  We all know that they were just trying to support “Mr. Six-Pack”, Jimmie Johnson this week!

The third driver holding court with a majority of players this week is Joey Logano.  It was noticed that “Jim, aka Chiefy”, “Jason The Latent Tie Dye Hippie”, as well as “Leon Your Most Humble Sheriff” all were seen at the MAACO paint shops.  It was gleaned by our illustrious Redneck Fantasy League P.I. that all three of these players were inquiring about trying to purchase the Shell/’Pennzoil paint scheme for their rides this week!  Is that being a true fan or what?

Additional information has leaked out this week regarding both Zee and “David The Mudslinging Throttle Jockey”.  Reliable sources close to those individuals have come forward on the understanding of anonymity this week.  Those reliable sources have leaked out the information that those two players were seen for hours hanging out in Target this week!  Is it just a coincidence that these two players are rooting for “Young Money”, Kyle Larson this week?  I think not!

Furthermore, word has been leaked that “Dan The Numbers Cruncher” and “Carlton The Doorman” were seen dispensing food in the soup lines this week.  Was this their way of helping Jeff Gordon’s “Drive To End Hunger”?  I’m just sayin……..

Things just keep getting stranger and stranger this week!  Was “Linda The Cookie Mom” and “Jeremy The Coach” in their local CAT dealership looking to purchase a bulldozer?  Or were these two there to purchase a little Ryan Newman swag?

Lastly,was Marc and “Cole The Natural” hanging out around the Stanley Tools delivery truck to purchase some additional tools for their tool box?  Or was this pair trying to buy some Carl Edwards T-shirts? Who knows what lurks in their hearts? Only The Shadow knows for sure!

The remaining seven players not mentioned this week have individual choices, and therefore, they are in bidnez for themselves!

Good luck to all.  May you end up with a “yellow rose”!