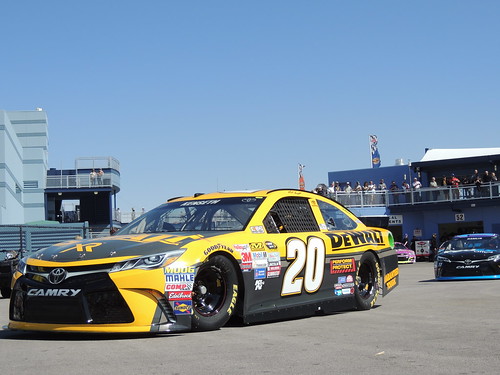 Polesitter Matt Kenseth led just 47 laps of the rain spattered Food City 500 in Support of Steve Byrnes and Stand Up To Cancer. But after a late race wreck-fest at Bristol Motor Speedway, he was leading at the end, claiming his first NASCAR Sprint Cup Series victory since September 2013.

Three cautions in the final 30 laps made a long day even longer as fuel became an issue while teams raced to beat the next wave of rain sweeping toward the 0.533-mile track. Rain began to fall again as the race passed the 500-lap mark under caution, leading to a red-flag stop at Lap 505 in an effort to get a green-white-checkered finish.

After waiting for one last time for the track to be dried, Kenseth held off the field to win the green-white-checkered finale!

We have a new leader this week!  “Jeremy The Coach” has slid back into the lead after falling to third place last week!

This week we had two players who selected Matt Kenseth as their man to win the Food City 500 In Support of Steve Byrnes and Stand Up To Cancer at Bristol Motor Speedway.

Both “Lonna The Quilt Angel” and “Jeremy The Coach” were the big winners with 47 points coming with the help of Matt Kenseth’s win at Bristol.

Our second highest scorer of the weekend is Edie who grabbed 39 points from Ryan Newman’s great 5th place finish.

Doing quite well this weekend were “Karen The Highly Opinionated Southern Belle”, “Bernie The Bay Area Bandit and Password Queen”, yours truly, “Leon Your Most Humble Sheriff”, as well as Marc. All four players scoring 38 points at Bristol, the first three players got their points from Kyle Larson’s 7th place finish, while Marc’s points came from Tony Stewart’s 6th place finish.

Also having a very good weekend was “David The Mudslinging Throttle Jockey”, who went out on a limb with is pick of Paul Menard.  But David was rewarded nicely with a cool 33 points!

Rounding out the top five scorers this weekend is Zee.  She picked Clint Bowyer at Bristol and logged 32 points!

This week there were only two players who remained in their previous position after Bristol, “Jim, aka Chiefy” and “Bernie The Bay Area Bandit and Password Queen”, all the other 20 players moved up or down spots.

The three biggest movers this week are “Karen The Highly Opinionated Siouthern Belle”, Marc and “Doug The Former Mudslinger and Psychic, Turned Kettle Corn Dude”.  “The Highly Opinionted One”, with her 38 points logged this week moved up 5 places to rest in 7th place this week.

Likewise, Marc climbed up that totem pole 5 spots and rests in 9th place after this race.

The next largest movers of the week were Edie and “Dan The Numbers Cruncher”, both moving three places.  Edie climbed up three spots, whereas “The Numbers Dude” fell three spots!

We have a repeat player back in “The Outhouse” this week.  “Cole The Natural” only escaped “the crapper” for one week before making a return engagement to the title of “Prince of The Poophouse”!

Next week NASCAR travels North on I-95 to Richmond,VA.  And as we all know……

“Well it’s a long way to RichmondRollin’ north on 95With a redhead ridin’ shotgunAnd a pistol by my side!”

TIL NEXT TIME, PULL YOUR GLOVES UP, FLIP YOUR VISOR DOWN, AND LET’SGO RACIN’!