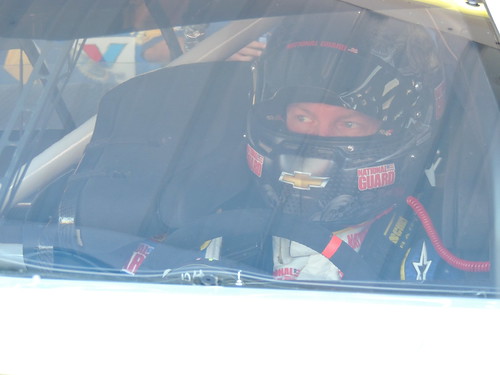 This week is not just another NASCAR race, THIS IS TALLADEGA, baby!

After making four Fall Talladega races with Jim, aka Chiefy, I can say that when the race track promotes itself with the slogan, “This is not just another race, THIS IS TALLADEGA“, there is more truth to that claim than meets the eye!  Like Daytona, this racing facility is so steeped with history that it permeates the atmoshere as you walk through the gates and make your way to your seat!

After all Awesome Bill From Dawsonville set the fastest qualifying lap ever recorded in NASCAR, 212 MPH, at Talladega!  Additionally, there was the horrendous crash with Rusty Wallace, the four-wide finish with Jimmy Johnson and Dale Jr., the photo finish with Clint Bowyer winning by a mustach hair, but ultimately it will always be known for Dale Earnhardt, Sr.’s very last victory!  You remember when he came from 19th place, literally from nowhere, with just three laps remaining, glued to Dale Sr.’s bumper was Kenny Wallace pushing him to victory in October 2000! (Today would have been Dale Sr.’s 64th birthday)

THIS IS TALLADEGA, BABY!

This week there are four drivers that the players have decided are the odds on favorites to punch their ticket to get into The Chase.  Oddly enough these four drivers have not yet won a race in 2015!

By the selected picture that accompanies this post you would already assume that the Pied Piper of the Plate Tracks, Dale Earnhardt,Jr., is one of those drivers.  What a safe assumption!

This week Edie, Doug The Former Mudslinger and Psychic, Turned Kettle Corn Dude, Bernie The Bay Area Bandit and Password Queen, and Brendon all are hoping that Junior can grab his first win for 2015, and put himself into the hunt for the 2015 Sprint Cup championship.

Likewise, there are four players who are hoping that Carl Edwards can score his very first win with Joe Gibbs Racing, and his first victory for 2015. those hopeful players are Carlton The Doorman, Zee, Jeremy The Coach, and David The Mudslinging Throttle Jockey and Now USAC Midget Official.

The two-time Talladega winner, Clint Bowyer, has three players who are excited about his potential this week, or else they drank way too much 5Hr, Energy Drink! Those three players who could really use a win in their portfolio this week are Dawn, Jason The Latent Tie Dye Hippie, and yours truly, Leon Your Most Humble Sheriff!

Lastly, there is lonely group of two players that may be somewhat miss guided in their choice for Talladega this week!  Both Doug Jr. the Crowned Prince of Kettle Corn and Linda The Cookie Mom are betting the farm that “where there is Smoke, there is fire”!  That can only mean that they are betting that a Talladega win will bring Tony Stewart out of his 2015 racing funk!

For those of you who were counting, that leaves nine players that are independent thinkers this week.  Or as I always put it, those nine players are in bidnez for themselves this week!

This would not be Talladega week without my most favorite song about “The Southland”!

Big wheels keep on turningCarry me home to see my kinSinging songs about the SouthlandI miss Alabama once againAnd I think it’s a sin, yeah

TIL NEXT TIME, PULL YOUR GLOVES UP, FLIP YOUR VISOR DOWN, AND LET’S GO RAIN’!