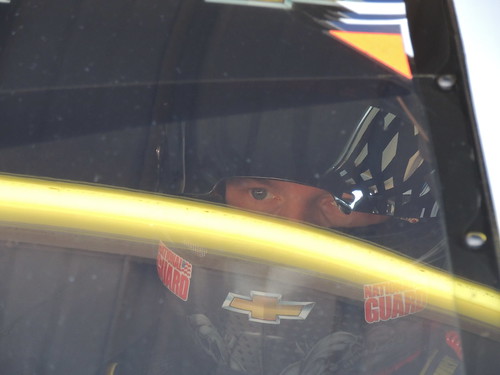 It has been 11 years since “The Pied Piper Of Talladega” drove his car into Victory Lane!

On this glorious afternoon, Dale Earnhardt, Jr. offered a one-word order to his team over the radio, a message that could be shared with the thousands of his devotees in the stands: “Celebrate!” he proclaimed.

The victory came barely 24 hours after Earnhardt had acknowledged a responsibility to perform well here at Talladega for his fan base, saying, “I feel like I’m supposed to get up there and lead.”

He did so, leading 67 of the 188 laps, then wove his way into Victory Circle, where he gushed nearly as dramatically as the geyser spewing from an engine that began overheating because of debris on the grille.

Just five days ago, April 29th, the NASCAR world, as well as the Earnhardt family, celebrated what would have been Dale Earnhardt Sr.’s 64 birthday!

With this Talladega Superspeedway victory all is well in JUNIOR NATION!

This week four players kept their Dale Jr. card in their vest until NASCAR moved to Talladega.  But Edie, Doug The Former Mudslinger and Psychic, Turned Kettle Corn Dude, Brandon, and Bernie The Bay Area Bandit and Password Queen scored 48 big ones, the maximum points for the race!

Rising to the ocassion, and being the second highest scorer of the week, was Jerry The Buschwacker.  This week The Buschwacker grabbed 43 points for Jimmie Johnson’s second place finish.

Meanwhile, Lonna The Quilt Angel logged 41 points from her “courageous out on a limb” choice of Paul Menard!

And rounding out the top five scorers of the week is A&M Aggie Sue.  The Aggie had a rather risky pick of Jamie McMurray, nevertheless, it paid of handsomely for her this weekend with a nifty 33 points.

The single biggest mover this week was Carole!  Her choice of Logano, and only scoring 11 points for that choice, caused her to plummett seven spots this week!

Jason The Latent Tie Dye Hippie did not fair so well this week, either.  The Tie Dye Dude only was able to score 14 points, the results of that score caused him the crumble and fall four places this week!

Linda The Cookie Mom slid down three spots after the Talladega race.

On the positivie side of things, Bernie The Bay Area Bandit and Password Queen, Edie, and Doug the Former Mudslinger and Psychic, turned Kettle Corn Dude all stepped up five places this week.

Lastly, Jerry The Buschwacker and Linda The Cookie Mom moved up three places.  The remaining players not mentioned moved up or down one to two spots this week.

As Talladega can be, this week was no exception, “there was the thrill of victory and the agony of defeat”!  This week awarding the crappiest pick of the week was extremely easy!  Cole The Natural had a very good pick, “Young Money”, Kyle Larson.  However, Larson got cought up in someone else’s wreck, and was knocked out of the race.  Thus, Cole just scored 2 measely points this week, garnering him the “crappiest pick of the week” award!

Additionally, for the second week in a row Zee holds down The Outhouse Award!

Next week NASCAR rolls into the Kansas Speedway for a Saturday night race on the 1 1/2 mile race track!  So I don’t know about you, but I am going to Kansas City, Kansas City here I come!

TIL NEXT TIME, PULL YOUR GLOVE UP, FLIP YOR VISOR DOWN, AND LET’S GO RACIN’!