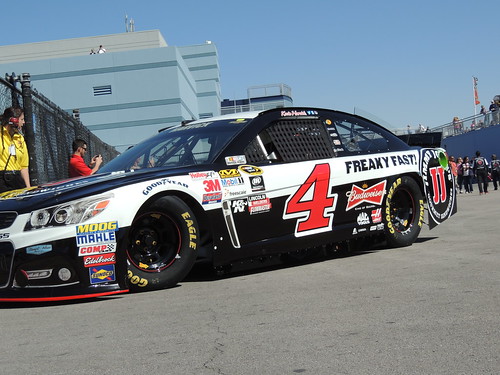 This week NASCAR moves to their home track for the race, the Charlotte Motor Speeday. This race marks the end of our first segment, and the 1/3 mark of the 2015 race season!

This week nearly slightly less than one third of the players have banded together in their support for that “Freaky Fast” Kevin Harvick to win the longest race of the year, the Coca Cola 600.  This week there are six players, Zee, Doug The Crowned Prince of Kettle Corn, Marc, Cole The Natural, and David The Mudslinging Throttle Jockey and USAC Official, who are vying to ride shotgun with Harvick this weekend for those 600 miles.

Addtionally, there are four players who are hoping Mr Six-Pack, Jimmie Johnson, can return to his previous days of owning this race track!  Those four players are Carlton The Doorman, Bernie The Bay Area Bandit and Password Queen, Jason The Latent Tie Dye Hippie and All Around Edgy Dude, and yours truly, Leon The Retired Airline Captain, Part-Time Cardiologist and Strawberry Picker, Former Air Force Pilot and Elephant Drive, as well as Your Most Humble Sheriff.

Three players, Lonna The Quilt Angel, Dawn, and Edie are all hanging with the pretty boy, Kasey Kahne this weekend.

Meanwhile, Jim, aka Chiefy and Jeremy The Coach are using their Dale Jr. card at Charlotte.

Both Doug The Former Mudslinger and Psychic, Turned Kettle Corn Dude and A&M Aggie Sue are rooting for Big Daddy, Jeff Gordon, to bring all the hardware home with him this weekend.

Lastly, Brandon and Jerry The Buschwacker are loving the driver that everyone loves to hate, Blazingly Bad Brad Keselowski!

The remaing three players are claiming to be free-thinkers this week, but we all know differently!  They are just in bidnez for themselves!

As this segment comes to close, the money paying positions, 1-5, are still not settled yet. Those five players, Jeremy The Coach, A&M Aggie Sue, Leon Your Most Humble Sheriff, Edie, and Karen The Highly Opinionated Southern Belle, could easily slide up or down one position after Charlotte. However, I would think that those five have locked themselves into some kind of payday after Charlotte.  But we can not overlook JIm, aka Chiefy and Jerry The Buschwacker, who are just barely on the outside looking in for a handout!

Likewise, after looking at the picks of the bottom three players this week, it has become quite obvious that our present player dwelling in the Outhouse, Cole The Natural, will win that prestigious award on his first attempt!  The reason being two closest players to Cole, David, and Zee, have the same pick as Cole, and therefore they can not over take him and evict him from The Outhouse!

So it becomes intuitively obvious that Cole The Natrual will be the youngest player to ever win the Outhouse Arward in the history of The Redneck Fantasy League!

This weekend is Memorial Day weekend, the day that we remember all those who have served this country we call home.  As we take a moment to remember those valliant men and women, remember it is not about the war, however, it is all about the warrior!