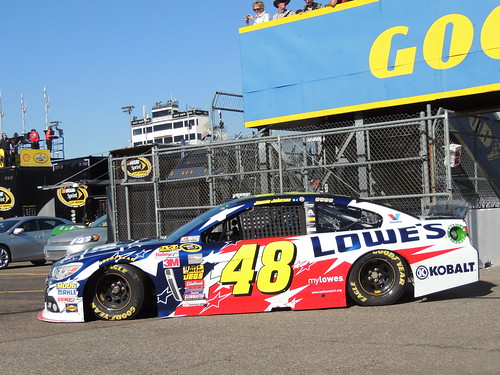 Well we have finshed the first segment of our 2015 fantasy league, and it is time to dig right into the second segment with this race at Dover this week! For those race fans that may not be up on the history of this lightening fast one mile race track, click on then above Dover link!  That will fill in all the holes that you are lacking in Dover knowlege.

With the traveling circus rolling into The Monster Mile this weekend, the racing will be wild, wolly, and very fast!  Besides the nickname of The Monster Mile, it is aslo known as the fastest self cleaning race track on the circuit!

This week reminds me of the way the season started out at Daytona!  One third of the fantasy league, seven players, are rooting for one driver.  That driver is Mr. Six-Pack, Jimmie Johnson.  After scowering the stats those seven players include Jason The Latent Tie Dye Hippie and All Around Edgy Dude, Doug Jr. The Crowned Prince of Kettle Corn, Dan The Numbers Cruncher, A&M Aggie Sue, Lonna The Quilt Angel, Carlton The Doorman, and lastly, Leon Your Most Humble Sheriff and Recuperating Surgical Victim!

Lastly, both Karen The Highly Opinionated Southern Belle, Part-Time Nurse, and Owner of a Fractured 5th Metatarsal, and Linda The Cookie Mom have all their marbles riding with Carl Edwards this week.

The remaining ten players not mentioned above are claiming to be indepenent thinkers this week.  But we really know that they are really in bidnez for themselves!

After much research this week I would like to bring to the attention of all our players that there was history made in segment #1 this year!

Well done Jeremy The Coach and Cole The Natural!!!