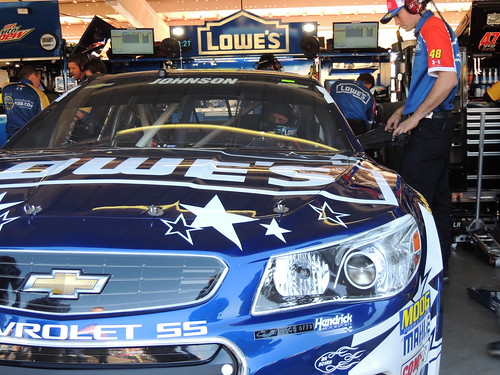 Jimmie Johnson, welcome to some rarified air and to a very exclusive club!

With Mr. Six-Pack’s win at The FedEx 400 Benefiting Autism Speaks 400 Sunday, Johnson becomes only the fifth NASCAR driver to ten or more races at a single race track!  Today Jimmie Johnson joins the likes of Richard Petty, David Pearson, Darrell Waltrip, and Dale Earnhardt, Sr. as the only drivers to belong to that club!

Johnson’s triumph was his series-best fourth of the season and the 74th of his career, eighth most all-time and two behind NASCAR Hall of Famer Dale Earnhardt, Sr. in seventh place.  It appears that J.J. may be on his way to his number seven championship!  Nevertheless, he seems to “working on a dream”!

Just like the first race of the season at Daytona this year we have one third of the fantasy league sharing the top position on the totem pole!  This week it appeared that many did their homework for Dover!

Considering that Jimmie Johnson had nine previous victories at The Monster Mile, the most of any NASCAR driver, it would seem like a no brainer to choose him as your pick! The seven brilliant players who decided to ride the copilot seat with Johnson were, Jason The Latent Tie Dye Hippie and All Around Edgy Dude, Doug, Jr. The Crowned Prince of Kettle Corn, Dan The Numbers Cruncher, A&M Aggies Sue, Lonna The Quilt Angel, Carlton The Doorman, and yours truly, Leon Your Most Humble Sheriff and Recovering Surgery Patient! These seven players all grabbed the maximum number of points this sweek, 47 big ones!

Likewise, Edie did herself proud, grabbing 41 points and rooting all the way to the checkered flag for Young Money, Kyle Larson.

Not to be outdone, Jerry The Buschwacker, in spite of dodging torrential thunderstorms and tornados this week, was the fourth highest scorer this week logging 40 points from Martin Truex’s 6th place finish.

Rounding out our top five scorers are Dawn, Zee, and Marc, all grabbing 34 points from Jeff Gordon’s 10th place finish.

This week it is very easy to select the player who wins the crappiest pick of the week award.  Since this is the first race of the segment this player, Brandon, also starts off the segment as the first player to land squarely in, and take firm control of, The Outhouse!

Next week the show moves to the tricky triangle in the Pocono mountains in central PA.