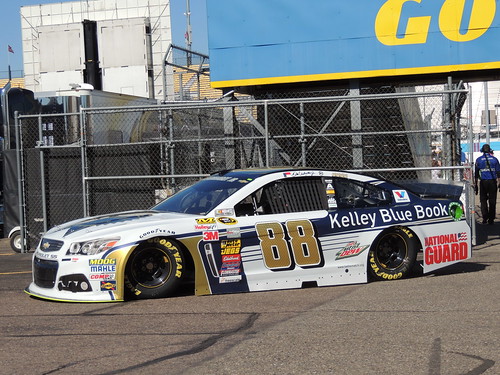 You know NASCAR and summer are both just hitting their strides because the haulers are heading for the Pocono mountains of PA this week!  Yes, it is time for the first of the two summer races this unique track known as “The Tricky Triangle.  This Sunday is the Axalta “We Paint Winners” 400!

As you might surmise from the photo to lead off this post, the Hendrick Motorsports #88 is the Redneck Fantasy League’s favorite driver this week! Nearly one quarter of the entire force of this league, five players, have decided that it is time for Junior to log his second victory of the season. Those five players include Dawn, Doug The Former Mudslinger and Psychic, Turned Kettle Corn Dude, A&M Aggie Sue, Dan The Numbers Cruncher, as well as Doug,Jr. The Crowned Prince of Kettle Corn.

There is another driver with a very healthy rooting section this week.  Edie, Carlton The Doorman, Linda The Cookie Mom, as well as Cole The Natural and Current Outhouse Award Winner, are all hoping that Kasey Kahne can add his name to the list of season winners and 2015 Chase contenders!

Meanwhile, David The Mudslinging Throttle Jockey, Jerry The Buschwacker, and Brandon will be betting the farm that “The Delivernator”, Denny Hamlin, can put his FedEx Toyota in the winners circle Sunday.

There is another three pack of players that have their collective eyes on Mr. Four-Time, Jeff Gordon, this weekend.  That trio includes Jim, aka Chiefy, Lonna The Quilt Angel, and Carole.

Lastly, there is the dynamic duo of Hop-A-Long, in her classic boot of black velco and Nifty Digits, sans stitches, better known as Karen The Highly Opinionated Southen Belle and Leon Your Most Humble Sheriff, who are betting the farm that Kurt Busch can bust off a win at Pocono!

After adding up the previous players and their choices, that leaves six independent thinkers.  That is just another way to say that those six players are in bidnez for themselves this week!

Can anyone stop the Jimmie Johnson freight train?  Right now he appears to be a marked man with four victories, and is wanted dead or alive!