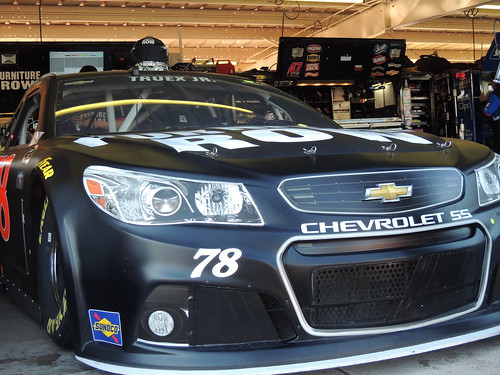 Martin Truex Jr. and Furniture Row Racing proved that one-car teams can win Sprint Cup Series races. They did that by collecting a popular victory Sunday in the Axalta 400 at Pocono Raceway.

The win was the first for Truex in 2015, and the first since he joined Furniture Row prior to the 2014 season, the first for crew chief Cole Pearn, and second in 285 starts for the Denver, Colorado-based one-car operation owned by Barney Vissar.

Nobody this week was foresightful enough to have Martin Truex, Jr. as their pick for Pocono.  Nevertheless, it was Marc who was the highest scorer this week with 43 huge points trough the courtesy of the Freaky Fast Kevin Harvick’s second place finish!

Almost not to be outdone was the 41 points that Zee was awarded from ol Mr. Six-Pack, Jimmie Johnson’s third place finish.

Doing nearly as well as Zee this week is the dynamic duo known as Hop-Along and Nimble Thumbs, better know to all of us as Karen Highly Opiniontated Southen Belle and Part-Time Nurse, and Leon Your Most Humble Sheriff. Both grabbed 39 points from the fifth place finish of the driver formally known as “Outlaw”, now referred to by his legal name, Kurt Busch.

The next trio of players, David The Mudslinging Throttle Jockey, Jerry The Buschwacker,  and Brandon all faired very well logging 34 points via Denny Hamlin.

The single biggest mover this week, and for that fact in the history of The Redneck Fantasy League, is somewhat befitting.  You see Jason Our Latent Tie Dye Hippie and All Around Edgy Dude, scored just 5 microsopic points from his choice of Ryan Newman.  That unfortuate choice for The Edgy Dude dropped through the field like a bad habit, falling a historic record 15 spots in the standings and landing in 20th place!  So just in case you heard a sonic boom after the race, it was just Jason The Edgy Dude breaking the sound barrier as he fell off his previous post!

There was a pair of players who climbed up 6 spots following Pocono. Both Marc and Leon Your Most Humble Sheriff rose up to land in 7th and 1st place, respectively.

Both David The Mudslinging Throttle Jockey and Lonna The Quilt Angel each moved 2 spots.  Fortunately for David his movement was up and now sits in 14th place.  Not so fortunate was Lonna, dropping to 6th place this week.

The rest of the players just sort of slid up or down one place this week.

As you might guess from some of the previous writings there was no doubt who would garner the crappiest pick of the week award!  It was Jason The Latent Tie Dye Hippie and All Around Edgy Dude with his microscopic 5 points!

Even though Brandon had a really good race this week, scoring 34 points, it was not enough to get evicted from The Outhouse this week!

Next week NASCAR moves to the backyard of the automobile industry in Detroit, MIchigan International Speedway located in Brooklyn, MI.