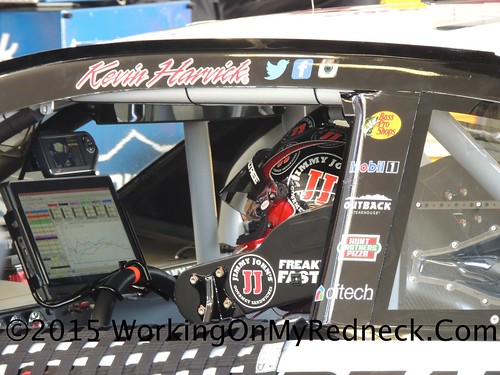 This week the racing moves to the backyard of the US automobile industry, Brooklyn, MI.  This track lies in the Irish Hills of Michigan, just about an hour and a half to the West of Motown, Detroit City!  NASCAR makes its first of two stops at the ultra fast Michigan International Speedway.

This week nearly one third of our fantasy league, 7 players total, have hitched themselves to the most consistent, and highest scoring driver of the 2015 season to date, Kevin Harvick.  This list of players that are rooting for “Freaky Fast” Harvick includes Jason The Latent Tie Dye Hippie and All-Around Edgy Dude, Doug, Jr. The Crowned Prince of Kettle Corn, A&M Aggie Sue, Doug The Former Mudslinger and Psychic, Turned Kettle Corn Dude, Dawn, Karen The Highly Opinionated Southern Belle and Part-Time Nurse, as well as Leon Your Most Humble Sheriff and lately known as Nimble Thumbs!

Edie, Jerry The Buschwacker, as well as Cole The Current Outhouse Award Winner are pooling their net assests and betting the farm on Carl Edwards this week.

Meanwhile, Carlton The Doorman and Bernie The Bay Area Bandit and Passward Queen thinks that Kurt Busch is ready to claim another victory.

Lonna The Quilt Angel and Brandon are picking Dale Earnhardt, Jr. on a track that he has logged a couple of victories in recent times.

Lastly, Linda The Cookie Mom and Dan The Numbers Cruncher have put their marbles all on Mr Nice Guy, Brad Keselowski Sunday.

Adding up these numbers, that leaves six players to be independent thinkers this week.  But we really know that those players are really just in bidnez for themselves!

TIL NEXT TIME, PULL YOUR GLOVES UP, FLIP YUOUR VISOR DOWN, AND LET’S GO RACIN’!