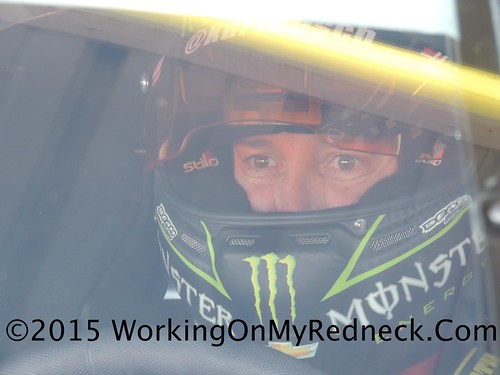 Kurt Busch fought his way to the front of the field, with his backup hot rod, through intermittent rain showers, and won Sunday’s Quicken Loans 400 at Michigan International Speedway when a deluge halted the race after 138 of a scheduled 200 laps.

The victory was Busch’s second of the season. He won for the third time at Michigan and for the 27th time in his career.

We had two players hit the trifecta at Michigan!  Both Carlton The Doorman and Bernie The Bay Area Bandit and Password Queen rode with Kurt Busch into the rain shortened Victory Lane celebration, and banked the max points today with a cool 47 big ones!  With the 47 points that Carlton racked up at Michigan, he has become our new leader!

Addtionally, both Lonna The Quilt Angel and Brandon had their marbles all in the #88 AMP Chevy and Dale Earnhardt, Jr.  That very calculated bet by these two was parlayed into a nifty 43 points.

Meanwhile, Carole was the only player to have Matt Kenseth on her side at Michigan. That pick put 41 points into Carole’s bank!

Linda The Cookie Mom and Dan the Numbers Cruncher each had chosen Blazingly Bad Brad Keselowski, and was rewarded nicely with 39 points for the day.

Rounding out the top five scorers this week is Zee.  She was the only player to hang out all day long with Clint Bowyer!  That choice gave her  34 points for Michigan.

For the third race of the segment, we say wide spread movement within the standings!

Once again there was one player who took a huge hit and plummeted from grace!  Marc was really trying to outdo the catastrophic fall last week by Jason The Latent Tie Dye Hippie and All Around Edgy Dude.  However, Marc’s 13 position free-fall came up 2 places short of the record 15 place fall of The Edgy Dude last week.

Both A&M Aggie Sue and Leon The Retired Airline Pilot, Part-Time Cardiologist and Strawberry Picker, and Your Most Humble Sheriff each stumbled 8 spots this week!

Additionally, Carole moved 8 spots on the totem pole, unlike A&M Aggie Sue and Your Most Humble Sheriff, her movement was in the upward motion.

Meanwhile, Doug, Jr. the Crowned Prince of Kettle Corn got up on the K-rail this week and lost 7 positions in the standings.  Also moving 7 spots was Bernie the Password Queen, but her movement was positive this week.

Linda the Cookie Mom had a very good race, climbing up 6 places in the standings this week.

Lastly, because of Brandon’s 43 points scored this week, he was evicted from The Outhouse and rocketed up the standings 4 places.

This week there was absolutely no competition for the crappiest pick of the week.  Marc scored a whopping 1 point this week, and won this distinction hands down!

Even though Jason The Latent Tie Dye Hippie and All Around Edgy Dude scored 17 points, he nevertheless has found himself sitting squarely in The Crapper and and is our new Prince of The Pooper, The Ogre Of The Outhouse, better known as the owner of The Outhouse Award this week!

Next week is Father’s Day and the Sprint Cup Series has the weekend off. For all of the players that are father’s, I hope that you have a great weekend!

TIL NEXT TIME, PULL YOUR GLOVES UP, FLIP YOUR VISOR DOWN AND LET’S GO RACIN’!