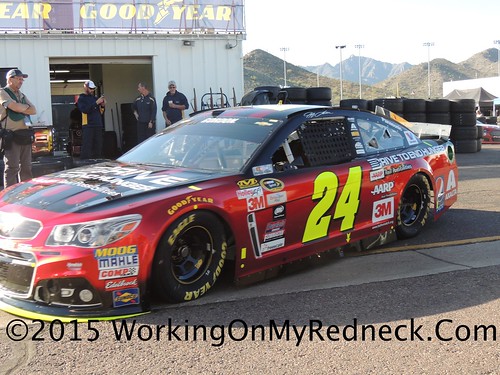 This Sunday will be the last time that Jeff Gordon will be participating, as a fulltime competitor, in the NASCAR Sprint Cup race at this storied road course in the heart of the California Wine Country.  He has put his Hendrick Motorsports #24 Chevy in the Winner’s Circle several times during his 20+ year NASCAR career.

This week the players of The Redenck Fantasy League overwhelming are hoping that Jeff Gordon can pull off one last victory at the former Sears Point Raceway.  One third of the players, seven in total, are riding shotgun with Jeff Gordon this week.  Those seven players hanging with Gordon are Edie, Jerry The Buschwacker, Jeremy The Coach, Bernie The Bay Area Bandit and Password Queen, Dan The Numbers Cruncher, Doug, Jr. The Crowned Prince of Kettle Corn, and yours truly, Leon Your Most Humble Sheriff.

Additionally, Jim,aka Chiefy, A&M Aggie Sue, and Marc are hoping that Joey Loagno can get back some of his early season mojo, and lock down another victory.

The husband and wife duo of Dawn and Carlton The Doorman are rooting solidly for Carl Edwards, hopoing that Cousin Carl can drive his JGR #19 Toyota into Victory Lane for the second time this season.

Lastly, Lonna The Quilt Angel, and Doug The Former Mudslinger and Psychic, Turned Kettle Corn Dude think that Kurt Busch can maneuver his Stewart-Haas Racing #41 Chevy in the winner’s circle and sip a little California wine.

For this first road course of the season there is still slightly more than one third of the fantasy league, 8 players in all, being independent thinkers.  But we all know what that means, they are in bidnez for themselves!

Just remember if your are going to the race at Sonoma, you might want to wear some flowers in your hair!