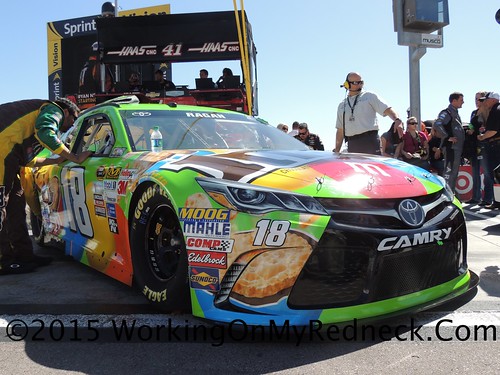 A late caution set the stage for Kyle Busch to use fresher tires and pass Jimmie Johnson for the lead, then hold off brother Kurt Busch and Clint Bowyer for the win in Sunday’s Toyota/Save Mart 350 at Sonoma Raceway.The win was Busch’s first of the season in just his fifth start of the year after he missed the first 11 races following a broken leg and foot in a wreck in the NASCAR XFINITY Series opener at Daytona International Speedway.The win was the second of his career at Sonoma and the 30th of his NASCAR Sprint Cup Series career. With the win, Kyle Busch now must finish in the top 30 in the points standings to be eligible for the Chase for the NASCAR Sprint Cup.

This week one of those eight “independent thinkers” was fortunate enough to put it all on the line for Kyle Busch.  That independent thinker that racked up 47 points is none other than David The Mudslinging Throttle Jockey!

Our new leader this week, Lonna The Quilt Angel, was also our second highest scorer.  She logged a nifty 43 points for Kurt Busch’s second place finish.

Jim, aka Chiefy scored his 39 points via the efforts of Joey Logano’s 5th place finish.

Lastly, Jason The Latent Tie Dye Hippie and All Around Edgy Dude round out the top five scores for Sonoma.  The Edgy Dude scored 36 points through Kasey Kahne’s 8th place finish at the road course.

This week the single biggest mover was our former leader, Carlton The Doorman, who plummeted 11 positions after Sonoma, only racking up 4 points!  Sunday morning he was the Redneck Fantasy League leader, and when the checkered flag fell in the Wine Country, Carlton The Doorman resided in 12th place!

Doing almost a badly as her hubby, Carlton The Doorman, Dawn too scored only 4 points.  Those 4 points made Dawn slip and slide 7 places all the way to The Outhouse!

Both Carole and Cole The Natural each migrated up the totem pole 4 places this week.

Lastly, Marc and Jim, aka Chiefy glided up the scoring pylon 3 places.

This week this part of the post will just deal with the husband and wife duo of Dawn and Carlton The Doorman.  Since these two had the same pick, Carl Edwards, and received only 4 dismal points, they each will share the crappiest pick of the week award.  Additionally, Dawn shined even brighter than her hubbythis week by plunging all the way into, and solelysecuring her position as “Princess of The Pooper”, and thereby garnering the coveted Outhouse Award this week!

Next week NBC takes over as the new broadcast partner when NASCAR moves back to Daytona for The Coke Zero.  The Coke Zero will be the first night race for NBC to cover.  It is July 5th and we all that those Southern Nights really heat up in the summer time!