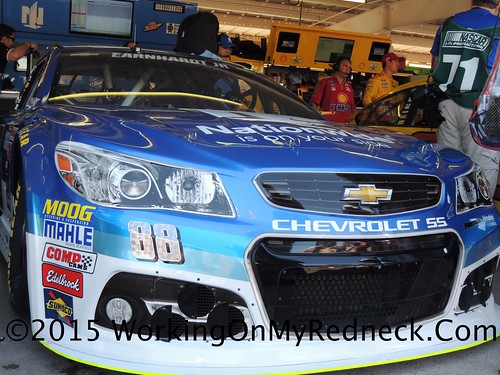 If the picture leading off this post didn’t give it away, then I guess I will spell it out this week just who is the player’s favorite driver.  He just happens to be the fan favorite driver for the decade plus, Dale Earnhardt, Jr.  This week there are seven players, one third of The Fantasy League riding this horse, hopefully to Victory Lane.  Those seven players include Karen Highly Opinionated Southen Belle and Partial Cripple, Carole, Zee, Cole The Natural, Bernie The Bay Area Bandit and Password Queen, Jason The Latent Tie Dye Hippie and All Around Edgy Dude, and lastly, Leon Your Most Humble Sheriff.

There are three players, Edie, Dawn, and Doug The Former Mudslinger and Psychic, Turned Kettle Corn Dude, are all betting the farm that Mr. Six-Pack, Jimmie Johnson, can add to his already season leading four wins for 2015.

This week Kasey Kahne has surfaced as a player favorite.  Both Lonna The Quilt Angel and Dan The Numbers Cruncher are hoping that Kahne can punch his ticket into The Chase, just like he last year.

Lastly, there are two players, Jerry The Buschwacker and Jeremy The Coach, who are betting that Kevin Harvick can get back to Victory Lane like he did at both Las vegas and Phoenix early in the season.

TIL NEXT TIIME, PULL YOUR GLOVES UP, FLIP YOUR VISOR DOWN, AND LET’S GO RACIN’!