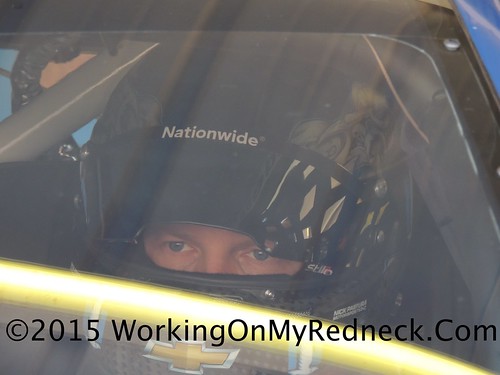 Watching in your review mirror as a fellow competitor’s car, in this case somebody that Dale Jr. has known his whole entire life, explodes into a mass of whirling shrapnel will have that effect on human beings!

“I mean, the racing doesn’t matter anymore,” Earnhardt said during his post-race press conference when asked about the scene that played out in his mirror at the end of the Coke Zero 400.

This was Earnhardt’s second win of the season, and both were resrtictor plate tracks- Talladega and Daytona.

There were a grand total of seven players, one third of The Redneck Fantasy League, who have finally come to their senses and selected Dale Jr. when picking a driver at either Talladega or Daytona. Those seven players that were riding along with Dale Jr., the strongest horse all night and logging the max points of 48 big ones, are Jason The Latent Tie Dye Hippie and All Around Edgy Dude, Bernie The Bay Area Bandit and Password Queen, Cole The Natural, Zee, Carole, Karen The Highly Opinionated Southern Belle and Partial Cripple, and Leon Your Most Humble Sheriff and Part-Time Soothsayer.

There were three players who also had a very good race Sunday night/Monday morning at Daytona when Jimmy Johnson finished second.  Those three are Edie, Dawn, and Doug The Former Mudslinger and Psychic, Turned Kettle Corn Dude, each collected 43 points for their efforts.

Meanwhile, Carlton The Doorman was the only one who had selected Denny Hamlin, who launched Austin Dillon up, over the pack of fierce competitors, into the catchfence, shredding his hot rod in the most horrific wreck that I have ever seen. Nevertheless, Carlton received 42 points from Hamlin’s 3rd place finish.

Both Jeremy The Coach and Jerry The Buschwacker received 40 points as the checkers flew last night for Kevin Harvick’s 4th place finish.

Rounding out the top scorers for the race was Jim aka Chiefy, who loved the fact that Kurt Busch delivered 39 points to him after his 5th palce finish.

As was mentioned above, we have co-leaders this week with Carole and Bernie The Bay Area Bandit and Passward Queen resting at the top of the standings!

After the Coke Zero 400 the standings looks like the remnants of an eathquake of the magnitude of 7.0!  The only player who did not move in the standings was Linda The Cookie Mom, every single player changed positions on the leaderboard!

The biggest mover was David The Mudslinging Throttle Jockey who plummetd twleve (12) spots with his microscopic socre of five (5) points Sunday!  That is not the record for this group of players, but nevertheless, it was quite an uncontrollable slid that even David would have a hard time managing in his midget!

This week the player who suffered the second biggest shakeup was our resident accountant, Dan The Numbers Cruncher.  The Numbers Dude dropped from the standings faster than a bad habit, sliding ten (10) places to rest in 12th.

A grouping of three players, Zee, Cole The Natural, and yours truly, Leon The Retired Airline Captain, Former Elephjant Driver, Part-Time Cardiologist and Strawberry Picker, and most importanttly Your Extremely Humble Sheriff each rocketed up the totem pole six (6) spots.  Zee and Cole The Natural are tied for third place this week, meanwhile Leon The Sheriff sits in 5th place.

Our former leader, Lonna The Quilt Angel, fell completely out of the top five in one swoop, falling five (5) spots to land in sixth place.

Both Karen The Highly Opinionated Southen Belle and Jason The Latent Tie Dye Hippie and All-Around Edgy Dude shimmied up the leader board four (4) positions.

The remaining players, absent the previously mentioned Linda The Cookie Mom, slid ever so slightly up or down one or two spots.

Additionally, we have a new Guardian of the Gashouse, a new Prince of the Poophouse this week!  With Brandon’s 6 points scored this week, he is this week’s Outhouse Award winner!

Good luck to all

This week’s video is dedicated to Austin Dillon and his wild ride up into the catchfence!