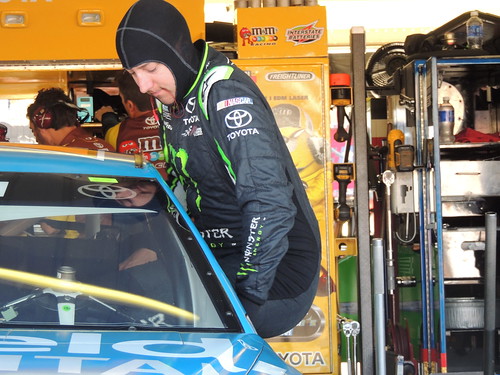 Kyle Busch continued his hard charge toward the top 30 in points in search of a Chase for the NASCAR Sprint Cup berth, winning a thrilling Quaker State 400 race at Kentucky Speedway on Saturday night.

Busch, who won at Sonoma Raceway two weeks ago after missing the season’s first 11 races with injuries sustained at Daytona International Speedway in the XFINITY Series opener, led a race-high 163 laps en route to his second victory in five races at the track.

Several of our independent thinkers did very well this week.  In fact, the top four scoring players this week were among the individuals that was in bidnez for themselves at Kentucky.

We have a new leader this week that is solely sitting at the top of the totem pole, Carole!

Karen The Highly Opinionated Southern Belle, and Owner of a Bum Wheel received 43 points for Joey Logano’s second place finish, and was our highest scorer of the week.

This week is a conglomerate of players numbering eight, seven of whick had Matt Kenseth and the remaining player picked Brad Keselowski.  The seven players who selected Matt Kenseth as their choice as The Quaker State 400 winner are Jason The Latent Tie Dye Hippie and All-Around Edgy Dude, Doug, Jr. The Crowned Prince of Kettle Corn, Cole The Natural, Linda The Cookei Mom, Dawn, Jim, aka Chiefy, and yours truly, Leon Your Most Humble Sheriff.  Carlton The Doorman was the only player who was hanging out with Blazingly Bad Brad Keselowski. All eight players were rewarded with 39 points for this race.

Rounding out ourtop five scorers is Zee with 36 points awarded to her by Kevin Harvick’s 8th place finish.

Because the standings were so close after the Daytona race and the wide spread of points scored this week, there was mass movement this week, there were only six out of the twenty-two players who remained in their previous spots after Kentucky.  Those six players are Cole The Natural, Leon Your Most Humble Sheriff, Jerry The Buschwacker, A&M Aggie Sue, David The Mudslinging Throttle Jockey, and our last week Outhouse Award winner, Brandon.

The crappiest pick of the week was really a no brainer.  The only player to earn a single digit score this week, a total of nine (9) points is Lonna The Quilt Angel!

Even though Brandon scored 41 points this week, it was not enough to get evicted from The Outhouse this week.  Brandon still has a six (6) point lead on his closest competitor for control of the crapper, Jeremy The Coach.

Next week NASCAR takes it’s traveling circus to New England.  To be more specific, about 100 miles Northwest of Boston, to The Granite State- Louden New Hampshire.