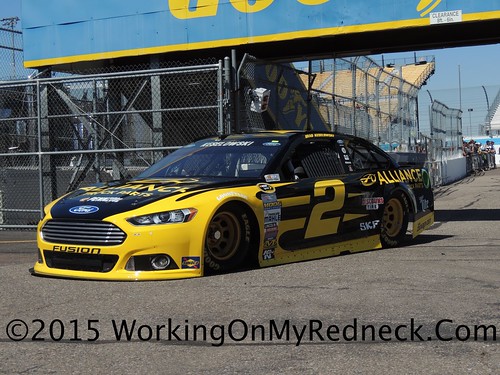 This week NASCAR rolls up the Eastern Seaboard to New England, northwest of Boston for their weekend show.  It is the first of two visits to New Hampshire Motor Speedway in Louden, NH. More importantly, when NASCAR returns for the second visit it will be race number 2 of The Chase.  Not only will this be a race that everyone who has not scored a victory so far this year wants to win, but it will also be a test bed for the teams that have already qualified for The Chase to gather up some important race setup data for later in the year.

At first glance at the accompanying photo, you may have had to step back a little and fully digest the total ambience.  It is not the traditional white or blue colored “blue deuce” that is normally seen week in and week out driven by “Blazingly Bad” Brad Keselowski.  It is, nonetheless, a picture of the Team Penske #2 Ford driven by Brad that I took at the Phoenix races earlier this year in March.  Now that the explanation of the above photo has been divulged you can now determine that a small majority, 1/5 of the players, are going to be riding with Keselowski this week at Louden.  My only hope is that those four players who have selected Keselowski this week, Dawn, Zee, A&M Aggie Sue, and Doug, Jr. The Crowned Prince of Kettle Corn will not also be consuming the sponsor’s product, Miller Lite, all weekend and risk getting nailed with a WTRUI!  (Watching The Race Under the Influence!)

For the remainder of the group picks there are five drivers that have two players each in their corner at “The Magic Mile”.

Jerry The Buschwacker (living up to his nickname) and Marc are hanging with, and hoping for, a third win for the former “Outlaw” and now reformed driver of the Stewart Haas Racing’s CNC Automation #41 Chevy now known as just Kurt Busch.

Arguably the most consistent race car driver and team this season, Kevin Harvick, is strongly supported this week by Carlton The Doorman and Lonna The Quilt Angel.  Could it be that these two players are just in Harvick’s corner this week for the Jimmy John’s sandwiches?  You know that those sandwiches are made “Freaky Fast”!

Karen The Highly Opinionated Southern Belle and Cole The On Demand Substitue Team Player must really believe that Louden is Jeff Gordon’s best track to score his first race win of 2015.  Both will be rooting for Gordon to win the race, and therefore qualify for his last Chase of his racing career.

Not to outdone this week by those other groups, both Doug The Former Mudlsinger and Psychic, Turned Kettle Corn Dude and Leon The Retired Airline Captain, Part-Time Cardiologist and Strawberry Picker, but most notably known as Your Most Humble Sheriff are hanging with one of their “homeboys” from CA, Kyle Larson.  Obviously they both are thinking that this would be “Young Money’s” best opportunity to finally capture his first Sprint Cup victory of his career.

Lastly, the husband and wife duo, Edie and Jim, aka Chiefy are in sync and have pledged their total support for Kyle Busch this weekend.  It is quite apparent that they both think that “Rowdy” can smoke the field, put his team even closer to the top 30 in points, and thereby qualify for The Chase.

(Just an editor’s note:  The elder Busch has seen fit to drop his nickname, Outlaw, earlier this year, however not so for the younger brother!!)

Good luck to all this weekend at Louden!  Rain, rain go away we need someone that is “bringing back the sun” for this weekend!

TIL NEXT TIME, PULL YHOUR GLOVES UP, FLIP YOUR VISOR DOWN, AND LET’S GO RACIN’!