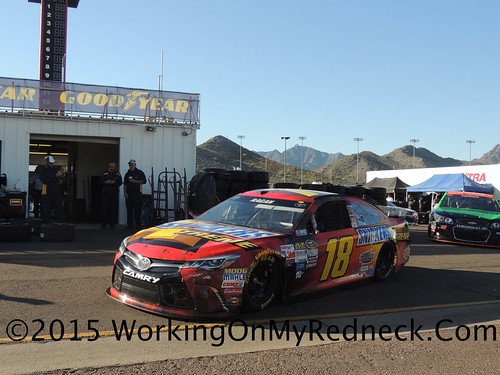 Kyle Busch won for the third time in four races on Sunday, claiming The 5-hour ENERGY 301 at New Hampshire Motor Speedway in a race that ended under caution to give the track 12 winners in its last 12 NASCAR Sprint Cup Series races!

The Joe Gibbs Racing driver entered the race in 35th place in the standings, 87 points behind 30th-place Cole Whitt. With multiple victories this year, Busch — who missed the first 11 points races after suffering injuries in the NASCAR XFINITY Series opener in February — would qualify for the Chase for the NASCAR Sprint Cup if he cracks the top 30 in the points standings.

After Sunday’s win, Busch climbed to 33rd in the standings and is 58 points behind 30th-place David Gilliland.

Even though I was leading all the naysayers about KyBu being able to make it into the top 30 in points before The Chase starts in Chicagoland, it appears that he will be well inside the top 30 in points prior to Chicagoland.  So tonight my dessert with dinner will be a huge serving of “humble pie”!  Not to worry, I have been to confession, revealed my sins, took a few hot laps around the beads,and now I am doing my pentence!  For those that know me well, I may be forced to wear a Kyle Busch T-shirt for my attonment!

Even though Carole did not score the highest amount of points this week, just 38, it was still enough for her to remain in the lead, albeit by only 6 points.

Grabbing the top score for the week would be Jim, aka Chiefy and Edie  receiving a cool 47 points with Kyle Busch’s 3rd victory in the last four races!

Not far behind those two players this week is Dawn logging 44 points from “Blazingly Bad Brad’s” 2nd place finish.

Carlton The Doorman and Lonna The Quilt Angel also had a great race, tallying up 42 points from Kevin Harvick’s 3rd place reward.

Only one player was riding shotgun with Sliced Bread, Joey Logano, this week.  Jeremy The Coach was that one player and in doing so he racked up a nifty 41 points.

Rounding out the top five scorers of the week would be our fearless leader, Carole.  As mentioned above, she racked up a nice score of 38 points.

The laregest mover this week is the author, the editor, and the publisher, and janitor of this site, Leon Your Most Humble Sheriff!  It has been quite a few weeks or months since yours turly has been a leader in this category.  With his choice of Kyle Larson this week, Your Most Humble Sheriff tripped, stumbled, and plummeted out of a money paying spot, falling seven (7) spots to land in way down in 11th place.

Both Linda The Cookie Mom and Doug The Former Mudslinger and Psychic, Turned Kettle Corn Dude each slid down the bannister five (5) places this week landing in 17th and 20th position, respectively.

Also taking a big hit this week in the standings is David The Mudslinging Throttle Jockey, falling four (4) spots landing in 21st place.  As a side note;  David is just 3 points out of a return visit to The Outhouse!

Conversely, both Lonna The Quilt Angel and Jim, aka Chiefy climbed up in the standings four (4) places this week, landing in 12th and 8th place, respectively.

Rounding out the five biggest movers this week is Bernie The Bay Arean Bandit and Password Queen and Dan The Numbers Cruncher.   Neither player did not fair well, dropping three spots (3) after Louden.  Meanwhile Zee, Edie, Dawn, Jeremy The Coach, Dawn, and Doug, Jr. The Crowned Prince of Kettle Corn all slid up slightly in the standings, gaining 3 spots each.

This week there was a spirited battel for the crappeiest pick of the week.  The three players with the lowest scores from Louden were Doug The Former Mudslinger and Psychic, Turned Kettle Corn Dude, Leon Your Most Humble Sherrif, and Linda The Cookie Mom.  However, thw winner of the crappiest pick of the week rests solely in the hands of Linda The Cookie Mom with her microscopic 10 points!

Next week NASCAR moves the show to the most historic racing facility in the country, the Indianapolis Motor Speedway, where its history roams all through Gasoline Alley, as well as the grandstands!