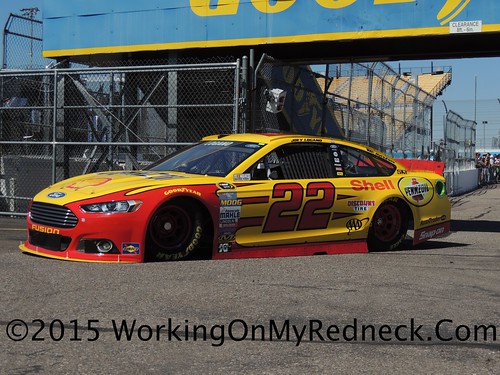 This week NASCAR makes its annual trek to the fabled Indianapolis Motor Speedway for the Crown Royal Presents the Jeff Kyle 400.

Our Picks For Indy

Many of you may have noticed that there has not been a whole lot of infomation gathered up and dispersed this season from The Redneck Fantasy League Private Investigator.  After the Homestead race of 2014, I had to put that individual on adminsitrative leave for providing some inaccuate and false information that was published on this web site.  After spending some time in the unemployment line he has vowed to be more accurate and check out his sources more thoroughly.  Therefore, I have offered him his old job back with that promise in mind!

Could this be the year that Joey Logano wins, arguably, the two most prestigious races on the NASCAR calendar?  Welll that is what more than one quarter of the players must be thinking this weekend. The last Sprint Cup driver to pull off that feat was Jamie McMurray winning both races for Chip Ganassi back in 2010, the only time in NASCAR history that this combo has been won by one driver! Nevertheless, there are five players, Dawn, Zee, Doug The Former Mudslinger and Psychic, Turned Kettle Corn Dude, Cole The On Demand Baseball Player, and Jason The Latent Tie Dye Hippie and All Around Edgy Dude are all betting the farm that Logano can be the second NASCAR driver to pull off the double!

This just in, Karen The Highly Opinionated Southern Belle, Jeremy The Coach, and Brandon were all secretly videoed by The Redneck Fantasy League Private Investigator this week sneaking into, and out of, their local Lowe’s store.  The burning question that TRFLPI (The Redneck Fantasy League Private Investigator) poses with these individuals is: Do you really think that these players have a do-it-yourself-project this week?  Could it be that they might think that by patronizing Lowe’s that their driver of choice this week, Jimmie Johnson, has a better chance of winning at Indy?

TRNFLPI also reported that both Jerry The Buschwacker and Dan The Numbers Cruncher had their cars parked, illegally I might add, in the handicapped parking at The Dollar General Store parking lot. Were these two players there to shop, or more importantly, were they there to gather, and process, some undercover info regarding their driver this weekend, Matt Kenseth?

Meanwhile there was more confidential info divulged involving both Linda The Cookie Mom and Carole.  It seems fairly far fetched, however I must still report, that both of these women were spotted around Oxnard,CA at the Haas Automation headquaters earlier in the week.  It was not known if these two were there by the invitation of Gene Haas, or there to spy on, and receive trade secrets, on the Kurt Busch race team that would allow them to obtain key information.  The investigation is still ongoing!

Next on the dish list comes Lonna The Quilt Angel and Bernie The Bay Area Bandit and Password Queen.  Both of these ladies were spotted slithering into their Bass Pro Shops store.  Now I am not sure if these ladies are great outdoors people or not, but the smart money says that this pair is getting desperate for a winner, and willing to do whatever is necessary to get those points!

Not to be out done this week is David The Mudslinging Throttle Jockey and Carlton The Doorman.  After checkeing the US ailines manifest list earlier this week TRNFLPI uncovered that both David and Carlton, under cover of darkness, jumped on an airliner and headed to Minneapolis, the headquarters of 3M.  Again this is an ongoing investigation, however, it would appear on the outside that there maybe be some unauthorized Jeff Gordon information being exchanged here as well!

Not to be outdone for cleverness and slight of hand is Marc and Jim, aka Chiefy.  Even though it is common knowledge that neither of these men are in need of another insurance carrier, both were seen talking to the Nationwide Insurance salesman.  Do these two really think that and independent insurance salesman can give them an unfair advantage of knowledge relating to Dale Earnhardt Jr.’s team for thye race this weeek at Indy?  Come on man!

Finally there were two more shaky individuals to report.  Both Doug, Jr. The Crowned Prince of Kettle Corn and Leon The Retired Arline Captain, Part-Time Cardiologist and Strrawberry Picker, Former Elephant Driver and Your Most Humble Sheriff were seen on the set of a Farmer’s Insurance commercial shoot with Kasey Kahne.  Really?????  Again this just smells of impropriety!

Again all these reported activities are still an ongoing investigation.  Details on your local 11 o’clock news!

For those of you are bogged down near the bottom of the standings, your time is running out!  Your only hope appears to be “runnig down a dream”!