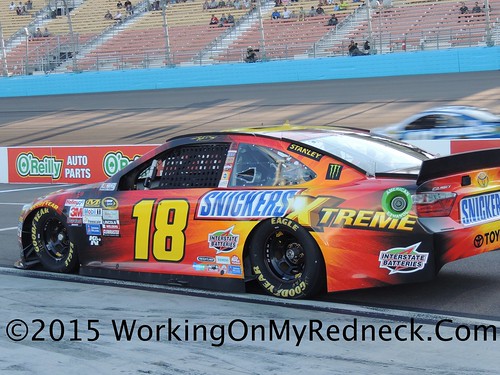 Kyle Busch won the Crown Royal Presents the Jeff Kyle 400 at the Brickyard in overtime on Sunday at Indianapolis Motor Speedway.  He did so by holding off Joey Logano and continuing to storm back from injuries toward a Chase berth.

Busch used a strong restart in a green-white-checkered finish to become the first driver since Jimmie Johnson in 2007 to win four Cup races in five consecutive starts. It was also Busch’s third win in a row. The Joe Gibbs Racing driver also gave Toyota its first victory at the Brickyard, and completed a weekend sweep after winning Saturday’s NASCAR XFINITY Series race.

Even though KyBu has been on a unbelieveable role over the past five weeks, not a single player had picked Kylie to win at Indy this weekend!  Nevertheless, there were five players, Dawn, Zee. Doug The Former Mudslinger and Psychic, Turned Kettle Corn Dude, Cole The On Demand Baseball Player, and Jason The Latent Tie Dye Hippie, and All Around Edgy Dude all selected second place finisher,Joey Logano, and were rewarded 43 points for their efforts.

A&M Aggie Sue racked up the second highest tally for the weekend with a grand total of 39 points for Denny Hamlin’s 5th place finish.

Also doing very nicely this weekend was the duo of Jerry The Buschwacker and Dan The Numbers Cruncher, each logged 37 points via Matt Kenseth’s 7th place finish.

Both Carole and Linda The Cookie Mom secured a nice finish with 36 points from Kurt Busch’s 8th place finish at Indy.

Rounding out the top five scorers this week is Edie.  She picked “Blazingly Bad” Brad Keselowski at Indy and received a nifty 35 points.

This week there was widespread movement within the standings.  In fact, the only player who did not change places was Karen The Highly Opinionated Southen Belle!

After the indy race Carlton The Doorman was the biggest mover this week, tumbling seven places in the standings landing in 13th position.

Also having a great weekend was Dawn who ascended four spots to sit now in 12th place.

Rounding out the top five movers are four players who moved three positions after Indy.  Doug The Former Mudslinger and Psychic, Turned Kettle Corn Dude marched up the totem pole three places to sit now in 17th place.  However, the other three players Doug, Jr. The Crowned Prince of Kettle Corn, Lonna The quilt Angel, and Leon Your Most Humble Sheriff all dropped three spots on the totem pole.

With just four races left in this segment we have a new “King of The Krapper”, “Prince of The Poophouse”, and “Owner of The Outhouse!  After Indy it is now David The Mudslinging Throttle Jockey who sits firmly in control of The Outhouse!

Next week NASCAR goes back to “the tricky triangle” of Pocono Raceway.  For those who may not be totally aware of the exact location of this race track, it is in the Pocono Mountains about 50 miles Northwest of the tri-city area of Allentown, Bethlehem, and Easton, PA.