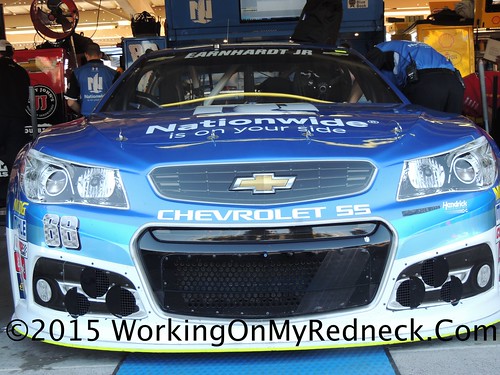 This weekend NASCAR makes its final appearance to “the tricky triangle, Pocono Raceway.  For those who may not know the complete history and design of this unique racing facility in the heart of the Pocono Mountains, you may choose to read my composition about the Pocono Raceway.

It appears that this week slightly more than 1/5 of the players are hoping that history will, in fact, repeat itself this weekend!  Remember that Dale Earnhardt,Jr. swept both races at Pocono in 2015, but only could muster an 11th place finish in the June race.  Nevertheless, it would appear that that there is a faction from within The Redneck Fantasy League that believes Junior can pul off a victory in the last race at Pocono for this year.  The four players who will be riding shotgun with Dale Earnhardt, Jr. this weekend at Pocono are Carlton The Doorman, Linda The Cookie Mom, Jerry The Buschwacker, and Jeremy The Coach.

Polling almost a well this week is Ryan Newman.  For this race Zee, Dawn, and Leon Your Most Humble Sheriff all are pulling for “The Rocket Man” to log his first victory of 2015.

Additionally, there are three drivers this week who have a pair of players each in their corner.

The “Freaky Fast” Kevin Harvick has Dan The Numbers Cruncher and Jim, aka Chiefy rooting for him to grab his third victory of the season.

Cole The On Demand Baseball Player as well as Doug The Former Mudslinger and Psychic, Turned Kettle Corn Dude are hoping that “the blue deuce” of Brad Keselowski will be driving into Victory Lane when the checkered flag falls for his second win of 2015.

Lastly, both Brandon and Carole would really be celebrating if Jeff Gordon could put his race car into the limelight and the winner’s cirlce after the checkered flag waives Sunday afternoon at Pocono for his first victory of 2015.

If you are adding up the numbers you would see that there are thirteen (13) players who were mentioned above.  That leaves nine (9) players who are independent thinkers for Pocono.  But we all know tht those nine players are really in bidnez for themselves!

Good luck to all of our players this week.

For the drivers this weekend that have “taken their family from their Carolina home”, they may be humming this tune at Pocono.  After all, if they hit the jackpot and win the race at Pocono there will be “fire in the mountains and lightening in the air”!