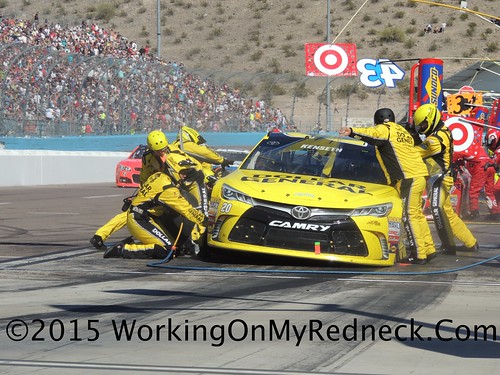 Matt Kenseth won his first career race at Pocono Raceway in the Windows 10 400 on Sunday.  After taking the checkered flag, Kenseth slithered his way into Victory Lane after Joey Logano, Kyle Busch and Martin Truex Jr. all ran out of fuel in front of him in the last two laps of the race.

It’s Kenseth’s second victory of 2015, and it clinches a spot in the Chase for the NASCAR Sprint Cup!

The Joe Gibbs Racing driver’s win breaks up KyBu’s streak of three consecutive Sprint Cup wins!  Notwithstanding, it was JGR’s fifth race victory in the last six races, and that organization’s fourth win in a row!

There was only one player who was riding shotgun with Matt Kenseth this weekend, scoring 47 points, Karen The Highly Opinionated Southern Belle.  She was one of those independent thinkers that we term as in bidnez for themself.

I have instituted a new weekly award beginning this week called The Fraternal Order of The Go Fast Award.  This award will be given to the player who is the highest scoring player each week. The Highly Opinionated One is the first person to be awarded the new weekly honor.

Both Doug The Former Mudslinger and Psychic, Turned Kettle Corn Dude, as well as Cole The On Demand Baseball Player grabbed a nifty 43 points from Blazingly Bad Brad Keselowski’s second place finish at the Windows 10 400.

Likewise, Brandon exited from Pocono, being the only player to put all his marbles in Jeff Gordon’s pouch, and was rewarded with a very handsome score of 42 points!

No doubt the rationale behind Carlton The Doorman, Linda The Cookie Mom, Jerry The Buschwacker, and Jeremy The Coach, who each walked away with 40 points via Dale Earnhardt, Jr.’s fourth place finish, was the knowledge that Dale Jr. swept the Pocono races last year.

Rounding out the top five scorers for the week is Marc.  Marc was able to log 38 points from Jimmie Johnson’s 6th place finish at Pocono.

Once again the eintire membership moved on the leaderboard, with the exception of of last week’s Prince of The Poophouse, David The Mudslinging Throttle Jockey.

This week we had two players who were the biggest movers, Jim, aka Chiefy, and Dan The Numbers Dude.  Both of these players plummeted nine (9) spots in the standings this week, landing in 17th and 20th, respectively!

The next biggest mover was Doug The Former Mudslinger and Psychic, Turned Kettle Corn Dude climbing up six (6) spots on the totem pole to rest in 11th place.

Also have a great race weekend was Carlton The Doorman and Jeremy The Coach, each ascending five (5) places in the standings. residing now in 8th and 13th, respectively.

Linda The Cookie Mom must be very pleased with her results at Pocono as well.  The Cookie Mom quietly moved up four (4) places parking herself in 12th place after Pocono.

This week we have co-winners for the crappiest pick of the week!  When Kevin Harvick blew a motor on lap 20, and was relegated to 42nd place, both Jim, aka Chiefy and Dan The Numbers Cruncher received just 3 total points for the race!  As I have alwasys stated, when you only receive a single digit for your efforts, your are in prime consideration for the crappiest pick of the week!  So this week, both Chiefy and The Numbers Dude must share that award!