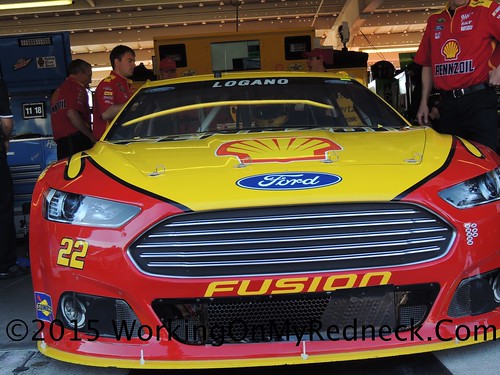 A week after running out of fuel while leading with three laps left at Pocono, Joey Logano finished off an unprecedented weekend sweep at Watkins Glen International with his first road course victory in the NASCAR Sprint Cup Series.

Pressuring race leader Kevin Harvick over a 30-lap green-flag run to the finish of Sunday’s Cheez-It 355 at the Glen, Logano made the winning pass through the final two corners at the 2.45-mile road course as Harvick ran out of fuel in Turn 6!

This week we have three players who tied for the highest scorers.  Both Linda The Cookie Mom and Lonna The Quilt Angel grabbed 43 points for Kyle Busch’s second place finish at The Glen, Additionally, Brandon was also rewarded 43 points for Kevin Harvick’s out-of-fuel-coast-to-the-finish-line 3rd place finish.

It only took ten weeks, but last segment’s winner of Outhouse Award, Cole The On Demand Baseball Player, has very stealthfully, and way under the radar, clawed his way into the lead with just two races left!  He only scored 29 points this race, however it was enough to propel him into the lead.  Sometimes you can go from The Outhouse to The White House in just one segment!

The second highest scorer of the week was last week’s Prince of The Poophouse and cellar dweller, David The Mudslinging Throttle Jockey.  The 41 points the David earned from Matt Keseth’s 4th place finish was enough to elevate him out of The Outhouse this week!

Dan The Numbers Cruncher and Dawn faired very well this week adding 39 points to their totals.  Their succes came via Kurt Busch’s 5th place show at The Glen.

Jerry The Buschwacker and Jeremy The Coach each came away from the road course adding 38 more points to the tally, thanks to Blazingly Bad Brad Keselowski’s 7th place finish.

Rounding out the to five scorers this week are Edie and Doug, Jr. The Crowned Prince of Kettle Corn with the 36  points that Carl Edwards handed them.

The single biggest mover of the week is Doug The Former Mudslinger and Psychic, Turned Kettle Corn Dude.  Last week The  Kettle Corn Dude climbed up six places, unfortunately he plummeted eight (8) spots this week!  That would be six steps forward and eight steps in reverse!

There were five players that either moved up or moved down three spots.  Jerry The Buschwacker, Brandon, and Dan The Numbers Dude all crept up three places on the totem pole. Conversely, A&M Aggie Sue and Leon Your Most Humble Sheriff lost traction and fishtailed down three spots.

Rounding out the five biggest movers this week is another large group of five players that moved three spots.  That group is headed up by Edie, Bernie The Bay Area Bandit and Password Queen, Jim, aka Chiefy, Doug, Jr. The Crowned Prince of Kettle Corn,  and Carlton The Doorman.  The only one of the group that slipped down in the standings was Carlton The Doormnan.

This week we had five players rack up the dreadful single digit as their total for the week!  If you think that scoring four (4) points is microscopic for the week like A&M Aggie Sue racked up Sunday, you ain’t seen nothing yet!  There were three players, Karen The Highly Opinionated Southen Belle, Carol, and Marc who only was able to add two (2) points to their 2nd segment total Sunday.  But the real winner for the crappiest pick of the week is awarded to Doug The Former Mudslinger and Psychic, Turned Kettle Corn Dude’s whopping one (1) point for the week!

Next week the rolling show moves back to the backyard of Motowm, to the Irish Hills of Michigan near Brooklyn, specifically the Michigan International Speedway.