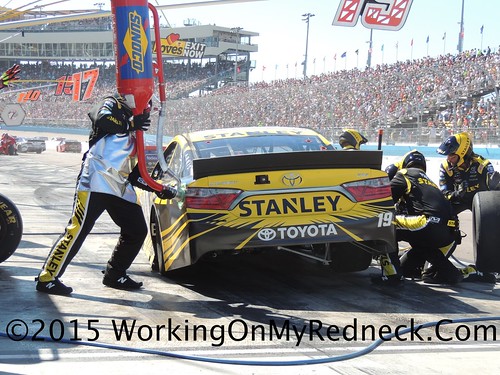 With just two races left in the second segment the race is getting very tight for those money paying top five positions.  There are just 24 points seperating the top five on the totem pole this week. Additionally, there are places 6-8 that are just 3 points apart, which puts them within 27 points of the leader.  Positions 6-14 are just 34 points out of the top five, and could easily slip into the picture with two good races.  So if you analyze the standings, there are 14 out the 22 players who have a legimate chance of getting some money for this segment!  That is better odds than you would get at Vegas! That will give you an indication as to how competitive this segment has been, week in and week out.

I know that it does not take a rocket scientist to figure out who is the favorite to win this week at Michigan, aal you have to do is look a t the featured picture!.  Nevertheless, one fifth of The Redneck Fantasy League, that is four players, are hanging their collective hats on Cousin Carl Edwards to win this week at Michigan.  Those four players who are all in for Edwards are Doug The Former Mudslinger and Psychic, Turned Kettle Corn Dude, Zee, Marc, and Lonna The Quilt Angel.

There are two drivers who have a fan club consisting of three players each.  The first of of those drivers, last week’s winner Joey Logano, has Carlton The Doorman, Doug, Jr. The Crowned Prince of Kettle Corn, and Leon The Retired Airline Captain, Former Cardiologist as well as Part-Time Strawberry Picker, and Your Most Humble Sheriff betting the farm that he can do a back-to-back Sunday burnout!

Likewise, Jim,aka Chiefy, David The Mudslinging Throttle Jockey, and Jason the Latent Tie Dye Hippie and All Around Edgy Dude are hoping the blue deuce of Blazingly Bad Brad Keselowski will wheel his beerwagon into Victory Lane.

Jeremy The Coach and Karen The Highly Opinionated Southern Belle must be looking for a home delivery from their FedExs delivery dudes cause they are hanging with The Delivernator, Denny Hamlin.

Edie and Bernie The Bay Area Bandit and Password Queen must love the color of yellow this week, becasue they are both riding shotgun with Matt Kenseth.

Lastly, we have Dawn and Dan The Numbers Cruncher both going out on kind of limb this week.  They both are banking that the heir to the billion dollar fortunes of the Menard chain, Paul Menard, will pull his Menard’s Chevy into the winner’s circle when the checkered flag falls at Michigan.

For you numbers people there were 16 players who were “team players” this week.  That means that there were 6 independent thinkers this week.  And we all know that those six players are really in bidnez for themselves this week!

After watching the race leaders, the last three weeks Running On Empty at the end of the race, I dedicate this video to Logano, Harvick, and Kyle Busch!