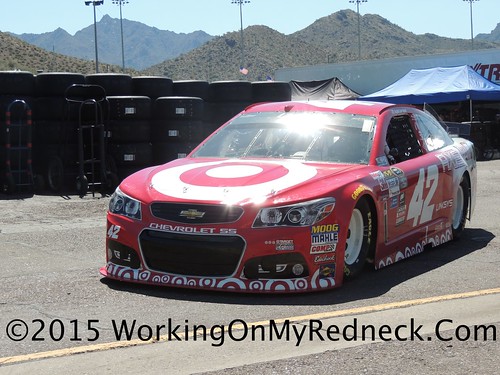 This week the Sprint Cup traveling circus makes it’s last pit stop for 2015 at “Thunder Valley”, “The Colloseum of Crash”, better known as the Bristol Motor Speedway.  It is also the last race of the second segment for The Redneck Fantasy League.

This race is extremely critical for several key players.  For the players that are resting in positions 1 through 5, Cole The On Demand Baseball Player, Edie , Zee, Jerry The Buschwacker, and Carole all are in a very tight race for the top five spots, and the big money!  Additionally, Bernie The Bay Area Bandit and Password Queen and A&M Aggie Sue are just outside of the money, looking in!

Conversely, Marc has only a very small grip on the Outhouse at this time.  David The Mudslinging Throttle Jockey is only 5 points from evicting Marc out of the Outhouse Award.  Likwise, Doug, Jr. The Crowned Prince of Kettle Corn is only 12 points from fighting for that hugely coveted award!  Who will prevail as our Outhouse Award winner this segment?

Could this be the weekend that Young Money, Kyle Larson, picks up his first Sprint Cup victory of his career.  That is the thoughts of 1/5, four players, of the fantasy league.  Jim, aka Chiefy, Carole, Cole The On Demand Baseball Player, and Bernie The Bay Area Bandit and Password Queen all think that Bristol is the most likely place for Larson to punch his ticket to The Chase.

There are four Sprint Cup drivers, this week, that have a rooting section of two players each for Bristol.

The brother-sister duo of Zee and Jerry The Buschwacker are aligning themselves up this week with the senior Buschwacker, Kurt, formerly known as The Outlaw!

Carlton The Doorman and Jeremy The Coach love the color of yellow, and therefore, they are putting all their marbles in Matt Kenseth’s yellow marble pouch this week.

And lastly, Dawn and Leon Your Most Humble Sheriff are, for some unknown reason, Sticking With The Biff this week.

Since this one of the NASCAR bullrings, I will issue my standard alert to all drivers and crewmembers:

Gentlemen please leave your egos, your frustrations, your feelings, and most importantly your weapons at the pit gate!

Good luck to all in this final race of segment number two!