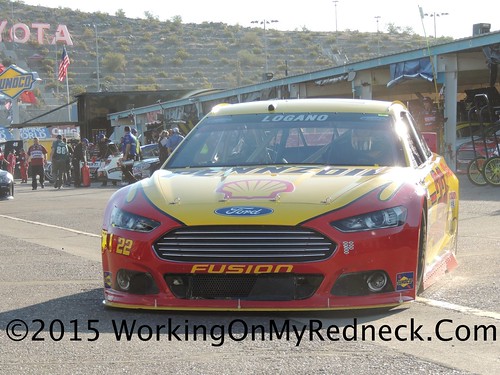 Joey Logano and Kevin Harvick put on a battle worthy of The Last Great Colloseum, better known as Bristol Motor Speedway during the Irwin Tools 500!  Logano’s Team Penske Ford was the fastest chariot in the last 80 laps of the race, giving him his third win of the season and his second at Bristol.

David The Mudslinging Throttle Jockey fared better in The Redneck Fantasy League today,gathering up 40 points from Jimmie Johnson’s 4th place finish, than he did last night at Chico in his midget. This from The Mudslinging Throttle Jockey’s Facebook entry regarding the Chico race last night, and I quote: “Started outside pole in my heat and the engine died while leading on the opening lap…fuel pump came disengaged…started 16th in feature and was in 8th on lap 6…up to 4th on lap 14 but ran out of tear offs…finished 30 laps in 5th.”

Additionally, there was a trio that slated fourth on the scoring pylon this week.  Karen The Highly Opinionated Southen Belle, Doug The Former Mudslinger and Psychic, Turned Kettle Corn Dude, and Brandon all put 38 points in their bank this week from Kyle Busch’s 8th place finish.

Rounding out the top five scorers of the week is a group of two players.  Both Lonna The Quilt Angel and A&M Aggie Sue were rooting for Ryan Newman and for their efforts they received 34 points.

Only 2 players, Marc and Leon Your Most Humble Sheriff, remained in their previous positions.  That means that there were 20 players who changed positions this week!

The single biggest mover of the week was Jim, aka Chiefy, falling seven (7) positions and finishing just one (1) point out of The Outhouse, residing in 21st place!

The second largest movers of the week consisits of a duo from opposite sides of the country. Doug The Former Mudslinger and Pyschic, Turned Kettle Corn Dude ascended up the standings six (6) positions to finish in tie for 13th place.  While Carlton The Doorman from Central Florida plummeted six (6) spots to land in 15th spot!

We have a group of six players who managed to move three places for the week.  Lonna The Quilt Angel is the only one of the group who made positive ground by climbing up the totem pole to finish out the segment in 7th place.  Cole The On Demand Baseball Player, Carole, Bernie The Bay Area Bandit, Dawn, and Dan The Numbers Cruncher all fell three spots to finish out the segment in 4th, 8th, 9th, 11th, and in a tie for 18th place, respectively.

The last race of the segment produced a tie for the crappiest pick of the week.  Both Jeremy The Coach and Carlton The Doorman pulled off a single digit score of two (2) microscopic points in week number 12!  There was also another duo to score a single digit score this week of three (3) points, Jim, aka Chiefy and his nephew and my grandson, Cole The On Demand Baseball Player,  So as you can see there was tight competition for this award in the final week of this segment, however the winners are Jeremy The Coach and Carlton The Doorman scoring just two (2) points for the week!

Now that we have finished the second segment, we have another first time winner for The Outhouse Award, Marc.  Even thougfh Marc scored 39 points today, it was not enough to escape his firm grip on the throne.  It was a very hard fought batte to see who could become the person who could score the least amount of points for the segment, and thereby win the coveted Outhouse Award. The winner, by just one point over Jim, aka Chiefy, is in fact Marc!

Fortunately we all get a week off before we start the last segment of the 2015 race season.  That will give everyone a week to regroup and get their attitudes right!  For me, I have to realign my expectations, cause I won’t back down!

The next race for Sprint Cup is Labor Day weekend at The Lady in Black, The Track Too Tough To Tame, Darlington!