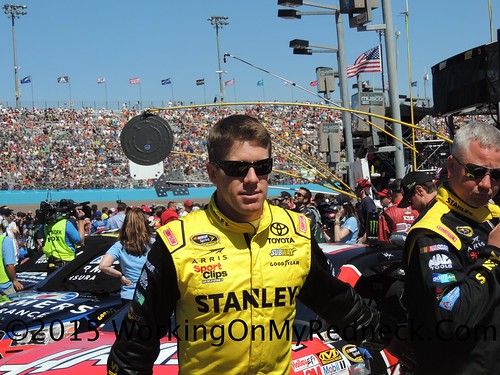 Tonight the address of the race track, Darlington Raceway, was at the intersection of the nostalgic past and the present!  And to fortify that statement the pre-race entertainment was Grand Funk Railroad, the cars were wrapped in tributes to past paint schemes, and the living leginds of the sport was on hand for driver intros!  Man that was throwback at its finest!  The topper was having Ken Squier, Ned Jarrett, and Dale Jarrett call a portion of the race.

Sports fans, it gets no better than that in NASCAR!  If there was ever a stroll down memory lane that was iconic, tonight was the night!  Bell bottom pants, leisure suits, big hair, and tributes to the living legends was the order of the day and night.

For a few minutes after the checkered flag flew the race track was renamed Carlington!  Carl Edwards did his signature back flip, claimed his second victory of 2015, all after rallying from two laps down earlier in the race, and ultimaltely hanging on to win the Bojangles’ Southern 500 on a throwback night at Darlington Raceway.

This week there was nobody that had the foresight to pick the race winner, Cousin Carol Edwards as their choice for Darlington.  Nevertheless, both Jim, aka Chiefy and A&M Aggie Sue were riding shotgun with Blazingly Bad Brad Keselowski, who finished second, and were the highest scorers of the weekend, garnering this award and 44 points to boot.

Not far behind those two individuals in this week’s scoring was Marc.  For Marc’s choice of Denny Hamlin, the third place finisher, he was able to rack up 42 points.

Bernie The Bay Area Bandit and Password Queen and Cole The On Demand Baseball Player started out the last segment of the year with a bang, and 41 points from Joey Logano’s 4th place finish.

Five players had chosen Kevin Harvick to close the deal this week.  Although he was not able to close the deal at Darlington, Harvick did provide 40 points for Karen The Highly Opinionated Southern Belle, Dawn, Doug The Former Mudslinger and Psychic, Turned Kettle Corn Dude, Edie, and Jason The Latent Tie Dye Hippie and All Around Edgy Dude .

Rounding out the top scorers with 36 points from Dale Earnhardt, Jr’s 8th poace finish is Brandon.

Since this is the first race of this segment, the crappiest pick and The Outhouse Award goes hand-in-hand.  This week we have a tie for both of these prestigious awards.  Even though a pick of Matt Kenseth would be a great pick for Darlington, this week that pick got you the crappiest pick and a ticket directly to The Outhouse!  As we have had to do from time to time, this week we had to utilize the two hole version of The Outhouse to accomdate both Doug,Jr. The Crowned Prince of Kettle Corn and Leon Your Most Humble Sheriff.  Both only were able to salvage 23 points this week, which was the lowest score of the race.

Next Saturday night at Richmond will be the last race before The Chase begins.  Just remember that desperate people do desperate things!